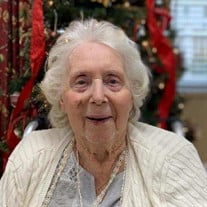 Alice Elaine Sulley went to her eternal rest on Sunday, June 5, 2022, aged 96 years. She is pre-deceased by her husband, John Phillip Sulley. She was born March 25, 1926, in Hartford, Ct. to Charles and Anna Blomberg. The family eventually moved to Longfellow Avenue in Teaneck, N.J., where she met her future husband, whose family lived on the same street. She was attending Teaneck High School when World War II broke out. After serving as a volunteer at a hospital, she decided to pursue a career in nursing and trained at St. Luke’s Hospital in NYC. She and John had dated during high school, but he had left his junior year in 1942 to join the U.S. Navy and serve his country. After the war, the high school sweethearts were reunited, engaged, and wed on January 31, 1948. They lived in a house on Longfellow Avenue and began a family. In 1958, seeking a quieter environment, they moved to the rolling Somerset Hills country town of Bedminster, N.J. There, both John and Alice were active in church and actively practicing their faith, even holding prayer meetings in their house. John, a civil engineer, helped found the Christian Center in Morristown, N.J. and was a member of The Full Gospel Business Men’s International. Once the children began school, Alice returned to work as a nurse with the Somerset County Visiting Nurses Association. In 1975, they moved to Bradenton, Florida, then to Parrish, where they lived till John’s death on June 11, 2010. They were together 62 years. Not long after, Alice moved to New Castle, Indiana, when her daughter Diane and husband moved to be near their daughter and family there. She was a resident at both Forest Ridge and Hickory Creek in New Castle until her passing. Alice is survived by her son, David (Bonnie) Sulley, of Austin, Texas, and their three daughters, Caitlin, Allison, and Hannah; Diane (John) Thompson, and their daughter Casey (Cory) Knight, and their son Jason Thompson, all of Hagerstown, Indiana; and ten beautiful great grandchildren. Graveside services will be held at 11:00am Thursday, June 9, 2022 at West Lawn Cemetery in Hagerstown.

Alice Elaine Sulley went to her eternal rest on Sunday, June 5, 2022, aged 96 years. She is pre-deceased by her husband, John Phillip Sulley. She was born March 25, 1926, in Hartford, Ct. to Charles and Anna Blomberg. The family eventually... View Obituary & Service Information