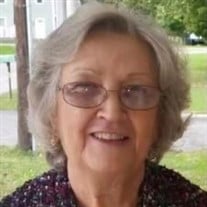 Barbara Janet Dalton, 74, of Greensboro passed away Wednesday, June 30, 2021 at IU Ball Memorial Hospital. She was born in Olive Hill, KY on March 2, 1947, a daughter of the late Rufus F. and Delcie M. (Keaton) Adkins. Barbara held a deep love for her Lord and Savior, as just a few days ago she told her daughter she would soon be holding the hand of Jesus. Barbara had been involved in church her whole life, at one point participated in the Bible Study Fellowship program at the Presbyterian Church in New Castle. She was a longtime member of the Greensboro Methodist Church and was currently attending Mt. Zion Wesleyan Church. Next in line to her heart, following the Lord was Barbara’s family. She enjoyed family gatherings and camping trips but had a special place in her heart for her grandchildren. She loved just spending time with them especially while playing SKIPBO. She also made it a point to attend as many of their sporting events as possible and supported the kids on the teams with homemade snacks. Barbara was an awesome cook and baker and was a member of the Home Economics Club in Greensboro. Over the years, Barbara had spent time as a caregiver for the elderly. She had a love for all genres of music but she really enjoyed bluegrass gospel and festivals. Barbara is survived by her husband of 56 years, Donald Dalton Sr. of Greensboro; son, Donald (Mary) Dalton Jr. of Knightstown; daughters, Marcy (Rodney) Brenneman of New Castle, Jessica Plank and significant other, Scott Van Hoy of Knightstown; grandchildren, Erica (Alana) Dalton of Whiteland, Sydney (Cory) Smith of Dunreith and Jordyn Plank of Knightstown; great grandchildren, Mia Smith of Dunreith, Garret, Gabrielle and Grant Doss all of Whiteland; brothers, Larry (Mary) Adkins of Greensboro and Gary Adkins of Monticello, KY; sister, Marlena (Dennis) Adkins of Kennard; sisters-in-law, Ida Reynolds of New Castle and Sue Niles of Hamilton, OH; brother-in-law, Ralph (Roxie) Dalton of Greensboro; several nieces, nephews and her grand dog, Cali. In addition to her parents, Barbara was preceded in death by her brother, Marvin Adkins and infant brother, Danny Ray Adkins. Services will be at 10:00am Saturday July 3, 2021 at Hinsey-Brown Funeral Service in Knightstown with Rev. Steve Arnett officiating. Burial will follow in Glen Cove Cemetery. Visitation will be Friday from 4:00pm- 8:00pm at the funeral home. Memorial contributions may be given to the Henry County Heart Society, 1000 N 16th St. New Castle, IN 47362 with envelopes available at the funeral home. You may express condolences or share a memory of Barbara at www.hinsey-brown.com.