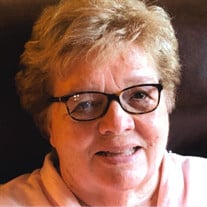 Barbara Ann Ratliff Cox passed away peacefully at her home outside of Mt. Summit on September 7, 2021. She was seventy-four years old. Barbara was born June 29, 1947 to Theodore R. “Ted” and Mary Esther Kissick Ratliff at Henry County Hospital in New Castle. She grew up happily in Mt. Summit surrounded by a large extended family and many friends. Barb graduated in 1965 from Blue River Valley High School where she excelled academically and participated in many activities. She was a member of the National Honor Society, the Blue River Valley High School Band, Prairie Township 4-H Club, the Latin Club, and other activities at school, in the community, and at church. She was a vivacious and social young woman who always enjoyed her many friends and activities including those at the Mt. Summit Christian Church, where she was a member her whole life. After graduation from high school, Barbara went to Methodist Hospital School of Nursing where she graduated and received her Registered Nurse’s Cap and Pin in 1968. She was married that same year and gave birth to her son, Sean David Beall in 1969. Barbara then began a long, varied and successful career in Nursing and hospital Administration most of which was spent at Ball Memorial Hospital in Muncie, Indiana and Henry County Hospital in New Castle. At Ball Memorial, Barbara worked in Orthopedics and Oncology and was from 1975 until 1991 Director of Ball Hospital’s Medical Surgical Division. At Henry County Hospital in New Castle, she started the first Home Hospice Program. While working in nursing, Barbara obtained her Bachelor’s Degree in Nursing from Ball State University (1991) and her Master’s Degree in Health Administration from Indiana University (1995). She was also a fellow of the American College of Healthcare Executives. While she worked in Health Administration at Ball Memorial Hospital, she was in charge of building the Cancer Center at Forest Ridge in New Castle and remodeling the Cancer Center at Ball Memorial Hospital. After a wonderful career and many productive years, Barbara retired to her home in Mt. Summit where she and her husband of 40 years, Gary Cox, had lived while they worked and reared their three sons. They had built their retirement home just outside of Mt. Summit which she enjoyed immensely. Barbara loved working in her flower gardens and she liked to entertain family and friends there. She and Gary liked to travel. They also enjoyed biking together and with friends. In retirement, she was an active member of the Mt. Summit Christian Church where she loved singing in the choir. She was also a Roundup Board Member of Henry County REMC and she was on the Life Stream Board in Muncie, Indiana for several years. She stayed in touch with her colleagues from work and participated in various professional activities and organizations after her retirement. She was preceded in death by both her parents, Theodore “Ted” Ratliff and Esther Ratliff. She is survived by her husband, Gary Cox; her sons, Sean Beall, Kevin Cox (Taylor) and Brent Cox (Cindy); several grandchildren and a great granddaughter. She is also survived by a brother John Mark Ratliff (Jan); a nephew Gabriel Ratliff (Kat); a sister Linda Alexander (Steve) and many cousins from the Kissick and the Ratliff families. Barbara will be missed by those who knew and loved her------especially her family. Services will be 10:00 a.m. Friday, September 17, 2021 at Mt. Summit Christian Church with Ben French officiating. Burial will follow in Mt. Summit Cemetery. Visitation will be from 4:00 – 8:00 p.m. Thursday, September 16 at Hinsey-Brown Funeral Service in New Castle. Memorial contributions may be given to IU Health Ball Hospice, 2401 W University Ave. Muncie, IN 47303 and Little Red Door. You may express condolences or share a memory of Barbara at www.hinsey-brown.com.