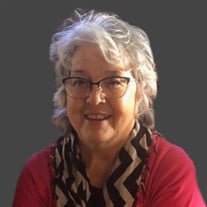 Belinda Jo Crabtree, 69, of Springport, IN passed away Sunday, February 20, 2022. She was born April 23, 1952 in Monterey, TN the daughter of the late Noel Whittenburg and Pansy Tays. Jo loved her family and friends. She enjoyed the outdoors, especially mowing the grass and raising flowers. Her favorite day of the week was Sunday. Her heart delighted to gather in public worship with the children of God to hear the gospel of the grace of the Lord Jesus Christ. How fitting that God was pleased to take her to heaven at the close of the Lord ’s Day, Sunday night at 9 pm, surrounded by family and friends. She attended Sovereign Grace Church in New Castle for several years. Jo also served as the Postmaster of Oakville for over 22 years, and then worked as a teacher’s aide at Blue River Elementary for several years. She adored her grandchildren and enjoyed every minute spent with them. Jo leaves to cherish her memory her husband, Bruce Crabtree; three children, Jennifer (Jim) Crabtree of Nicholasville, KY, Chris (Angie) Crabtree of Bradford, OH, Ben (Manetric) Crabtree of Indianapolis; eight grandchildren, Erin Jo Jones of Elizabethtown, KY, Christian Evans of Nicholasville, KY, Austin Evans of Louisville, KY, Devin Crabtree of Louisville, KY, Taylor Crabtree of Mooreland, IN, Amyah Crabtree of Springport, IN, Jade Crabtree of New Castle, IN, Cienna Crabtree of New Castle, IN an Monte Crabtree of Indianapolis, IN; three great grandchildren, Shy’Ana Mickenzi Keihl of Elizabethtown, KY, Joanna Crabtree of Mooreland, IN and Dexter Wesley of Springport, IN; a sister, Janet (Tommy) Stowers of Jamestown, TN; a brother, Butch (Janet) Whittenburg of Muncie; several nieces and nephews. Jo was preceded in death by her father, Noel Whittenburg of Crossville, TN; mother, Pansy Tays of Clarkrange, TN; one sister, Patricia Smith of Clarkrange, TN; two brothers, Larry Whittenburg Ronnie Whittenburg both of Clarkrange, TN. Go rest, dear Sister. We who are left behind will sing with confidence on your behalf: If sin be pardoned, I’m secure; Death has no sting beside; The law gives sin its damning power, but Christ, my ransom died. Services will be at 12:00 pm Friday, February 25, 2022 at Hinsey-Brown Funeral Service in New Castle with Pastors Don Bell and Bruce Crabtree officiating. Burial will follow in Woodlawn Cemetery in Springport. Visitation will be from 10 am until time of service. Memorial contributions may be made to Secret Families by mailing it to P.O. Box 12, Mt. Summit, IN 47361, or taking it to Star Bank in New Castle. Condolences and memories of Jo may be shared at www.hinsey-brown.com. View the service live at https://youtu.be/iUhQW5oz0zo

Belinda Jo Crabtree, 69, of Springport, IN passed away Sunday, February 20, 2022. She was born April 23, 1952 in Monterey, TN the daughter of the late Noel Whittenburg and Pansy Tays. Jo loved her family and friends. She enjoyed the outdoors,... View Obituary & Service Information