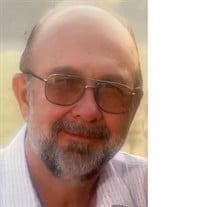 Bradley Wayne “Brad” LaMar entered the loving arms of Jesus on June 14, 2021 at Ball Memorial Hospital in Muncie, Indiana, the same place of his birth on October 26, 1942. He was born to Everett Wayne and Ruth Evelyn (Bowers) LaMar and grew up in Mt. Summit. He graduated from Mt. Summit High School in 1961, and received a B.S. in Elementary Education from Ball State University’s Teachers College in 1965, from which he also received an M.A. in Elementary Education. On August 7, 1965, he married Mary Ellen (Burkman) LaMar, a fellow elementary teacher. Together, they raised two sons on their beef cattle farms near Oakville, Springport, and Hagerstown. Throughout his 38-year teaching career, he taught 5th and 6th grades, starting at Springport Elementary School from 1966-1968, Cowan Elementary School from 1968-1979, and Hagerstown Elementary School from 1979-2002. In his retirement, he enjoyed driving for the Hagerstown area’s growing Amish communities, with whom he was a special friend. He also started Rabbit Ridge Boarding Stable on their farm. While teaching at Cowan, he was a 4-H leader and a founder of the Monroe Township Conservation Club. While living near Springport, he was a member of the former Springport Lions Club. He was a member of the Wayne County Retired Teachers Association and a past member of the Hagerstown Lions Club. A birthright Quaker, he was a member of West River Friends Church near Hagerstown. He was very involved in the activities of his sons, ranging from church youth group, to sports, to 4-H. He especially dearly loved his grandchildren, and was as involved in their activities as his health permitted. He was an avid reader of the works of Peter Capstick, Ernest Hemingway, James Herriott, Herman Melville, and James Michener, among others. In addition to beef cattle, he had various other livestock over the years, to include a dairy cow, sheep, hogs, donkeys, mules, riding horses, and a team of draft horses. He participated in a church mission trip to the Lakota Sioux Pine Ridge Reservation in South Dakota. He enjoyed travel throughout the USA, as well as Austria, Canada, England, Germany, Israel, Liechtenstein, Malaysia, Mexico, Oman, Singapore, South Africa, South Korea, Switzerland, United Arab Emirates, and Puerto Rico. Survivors include: his wife of almost 56 years, Mary Ellen; son, Nate (Kris), of rural New Castle; son, Chris (Ruthie), of rural Hagerstown; grandchildren, Elizabeth, Alexandra, Brooklyn, Bryce, Briella, and Brady; several nieces, a nephew, several cousins; and in-laws. He was preceded in death by his parents, an infant brother, Ronald LaMar, a granddaughter, Brynlee LaMar, three half-brothers (Wilbur, Stanley, and Robert LaMar) and a half-sister (Wanetta LaMar Selke). Brad & Mary Ellen raised their sons with and welcomed into their home exchange students from France, Germany (2), Israel (2), and Uganda (2), who were like children to them. ***You may view the service live by Clicking Here.

Bradley Wayne &#8220;Brad&#8221; LaMar entered the loving arms of Jesus on June 14, 2021 at Ball Memorial Hospital in Muncie, Indiana, the same place of his birth on October 26, 1942. He was born to Everett Wayne and Ruth Evelyn (Bowers) LaMar... View Obituary & Service Information