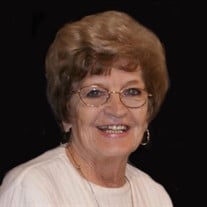 Carolyn J. “Kay” Roseberry, 85, of Anderson, passed away Tuesday, June 1, 2021 at Community Hospital in Anderson. She was born June 3, 1935 in Lapel the daughter of Ray and Lucille (Cast) Lewis. Kay graduated from Lapel High School in 1953 where she was a cheerleader and in band. She worked at Brockway Glass and Western Electric. She met Cleo in 1955 and they were married in 1956. In 1973 she went to work at Delco Remy in Anderson and retired in 1993 after 20 years of service. Kay and Cleo enjoyed spending time at Brookville Lake fishing and camping. They also traveled to Nashville to attend many concerts. Kay was a member of Faith Chapel Church and enjoyed being part of the Ladies of Faith. She enjoyed bowling, golfing, playing bridge and shopping. After the death of Cleo, she spent her time enjoying her grandchildren. She is survived by children, Tami (Gary) Wilson of Anderson, Todd (Stephanie) Roseberry of Anderson; grandchildren, Chelsea Opperman of Philadelphia, PA, Kindra (Bill) Whetsel of Anderson, Blake Wilson of Anderson, Linzi (Israel) Rodriguez of Gas City, Makayla (Sam) Pugsley of Middletown, Zariah Roseberry of Anderson, and Madilyn McDonough of Anderson; great grandchildren, Olivia, Lucas, Sophia, Dillon, Selena, Solomon, Waylon and Weston; brother, Jack Lewis of Lapel. In addition to her parents, she was preceded in death by her husband of 56 years, Cleo Roseberry; son, Tony Roseberry and brother, Bill Lewis. Services will be at 1:00 PM Friday, June 4, 2021 at Faith Chapel Church in Knightstown with Pastor Eric Boling officiating. Burial will follow in Glen Cove Cemetery. Visitation will be from 11:00 AM until time of service. Memorial contributions may be made to Faith Chapel Church, 359 E. Morgan Street, Knightstown, IN 46148. Condolences and memories of Kay may be shared at www.hinsey-brown.com.