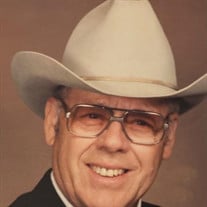 Charles E. “Curly” White, 93, of Selma passed away Sunday, September 12, 2021 at his residence. He was born January 24, 1928 in Muncie, Indiana to the late Charles V. White and Carrie (Pence) Fisher. Charles grew up working for and then in later years became owner of Standard Radio Parts in Muncie until his retirement in 2005. He served in the U.S. Army during WWII. Charles resided on White Ranch outside Selma for the last 66 years, where he and his wife, Patricia were passionate about raising, training and showing their horses. Through their many years of traveling, they culminated two world champion palomino stallions. They were members of the American Quarter Horse Association, Palomino Breeders Association, The Bar-D Saddle Club of Delaware County and the American Radio Relay League. Upon retirement, he and Patricia wintered in Seminole, Florida enjoying their many friendships developed in their RV community. He is survived by his special cousin, Nancy L. Arnold of Goshen; close family friends, Bruce Buchanan, Kevin, Jennifer and Hannah Buchanan, Katelyn (Jacob) Butler. In addition to his parents, he is preceded in death by his wife of 67 years, Patricia Sue (Deming) White in 2015 and a son, Charles L. White in 2002. A special thanks to his private caregiver, Kendra Shellabarger and the team at Southern Care Hospice (Kelly & Jasmine). All of you helped us to keep our promise to Charles and Pat. Per Charles' request, there will be no public services held. Burial will take place in Mt. Tabor Cemetery. Arrangements have been entrusted to Hinsey-Brown Funeral Service in New Castle. You may express condolences or share a memory of Charles at www.hinsey-brown.com.