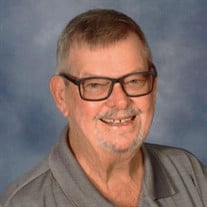 Daniel E. Wells, 77, of Kokomo and formerly of Carthage passed away Friday, June 3, 2022 at his residence. He was born October 20, 1944 in Carthage, the son of Clyde and Laura (Loveall) Wells. Dan was a 1963 graduate of Kokomo High School and attended Purdue University. He received his Bachelors Degree from Northwood University and Masters Degree from Kettering University. Dan retired from Ford Motor Company and had formerly worked at Allison’s Transmission, Ingersoll Steel and Brooks Foods. He was a veteran of the U.S. Navy serving during Vietnam with the Seabees. He was a member of UAW # 1111 and Kokomo Education Foundation. He enjoyed spending winters in North Fort Myers, Florida and loved his dog, Rosie and his bird, Betty G. Dan helped organize and established the Seabee Island X-4 in New Castle where he served as Commander for several years and was currently Commander of the State of Indiana NSVA. He enjoyed watching IU and Purdue Basketball, attending Symphony on the Prairie and local sporting events. He was passionate about his grandchildren’s continued education and enjoyed participating in the Memorial Day Parade. He is survived by a brother; Jerry (Marleen) Wells of Knightstown; a sister, Becky Wells of Raysville; a daughter, Debi Bledsoe of New Castle; grandchildren, Kylie McBride of New Castle, Aaron Hart of Huntertown, Amanda Escalante of Indianapolis and Alec Hart of Indianapolis; five great grandchildren, Nevaeh, Navan and Nekhi Goodman, Breona and Hendrix LaForce; and step daughter, Mindy Perkins of Indianapolis; several nieces and nephews. In addition to his parents, he was preceded in death by his wife, Janice Wells; an aunt and uncle who raised him, Joe and Della Fitzgerald; siblings, Geneva, Connie, Dick, Jim, Nina, Candy and Dean; son-in-law, Don Bledsoe; and great grandson, Niahm Goodman. Services will be at 11:00 AM Saturday, June 11, 2022 at Hinsey-Brown Funeral Service, Knightstown Chapel. Military rites will be conducted by U.S. Navy and the Knightstown American Legion Post #152. Burial will be in Riverside Cemetery in Carthage. Visitation will be from 4-8 PM Friday at the funeral home. In lieu of flowers memorial contributions may be given to Kokomo Education Foundation, Daniel Wells Scholarship Fund, 1500 S. Washington St., Kokomo, IN 46902 or Seabee Memorial Scholarship Association, P.O. Box 391, Springfield, VA 22150-0391. Condolences and memories of Dan may be shared at www.hinsey-brown.com.

Daniel E. Wells, 77, of Kokomo and formerly of Carthage passed away Friday, June 3, 2022 at his residence. He was born October 20, 1944 in Carthage, the son of Clyde and Laura (Loveall) Wells. Dan was a 1963 graduate of Kokomo High School and... View Obituary & Service Information