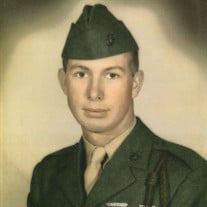 David Earl Gray Sr. 80, of Orange City, Florida formerly of New Castle passed away January 22, 2021 at Central Florida Regional Hospital. He was born January 21, 1941 in New Castle to the late Raymond and Eva (Gordon) Gray. David grew up in New Castle where he attended Walter P. Chrysler High School, until he left to serve in the United States Marine Corps. He was a veteran serving his country 14 years in Vietnam, where he received a Purple Heart for his service. David was a Range Instructor and a bomb dismantle expert. In 1970 David started working for Eli Lilly in Lafayette and retired after 25 years of service. After retiring in 1996 he and Helen moved the family to Florida where he spent the rest of his years. David enjoyed going to the beach where he metal detected, over the years he found many High School rings and would contact the schools to have them returned to the owners. David is survived by his wife of 59 years, Helen; son, David (Carolyn) Gray Jr.; daughters, Breonna and Cayonna Gray; 6 grandchildren; great grandson, David Allen, whom they are raising; along with several other great grandchildren; brothers, Glen (Carolann) Gray and Mike Gray; sisters, Kathy (Dave) Riley, Nancy (Jerry) Graves and Jean (Bill) Makey ; and several nieces and nephews. In addition to his parents, David is preceded in death by a daughter, Tammy Jewell; son, Bobby Gray and granddaughter, Devon Weaver. Memorial services for David will be 2:00 p.m. Saturday, April 17, 2021 at Hinsey-Brown Funeral Service in New Castle. Visitation will be 1:00 p.m. until time of services. In lieu of flowers the family asks that memorial contributions be made to Disabled American Veterans, VARO Federal Building, 575 N Pennsylvania St, Rm 324 Indianapolis, IN 46204. You may express a condolence or share a memory of David at www.hinsey-brown.com