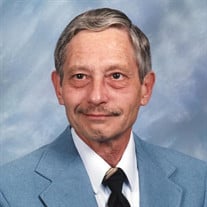 David “Dave” J. Pyle, 78, of New Castle went to be with the Lord Tuesday, February 15, 2022 at Henry Community Health in New Castle. He was born February 25, 1943 in Portland, Indiana, a son of the late James S. and Anna C. (Romey) Pyle. He was a member of the New Castle First Christian Church and also attended New Salem United Baptist Church. Before moving to New Castle in 1998, he was a member of West Walnut Church of Christ in Portland for 46 years. A native of Adams County, he lived most of his life in the Bryant area where he graduated High School in 1961. Later he served as Bryant Town Marshal for 10 years & Fire Chief for 8 years. He retired from Marsh Supermarkets in 2004, after 42 years of service. He was a former sergeant in both Jay County Sheriff’s Department Reserves and the Army National Guard & did volunteer work for the Civil Defense in Portland. After moving to Henry County, he did volunteer work for HCEMA, HCMRC & Westminster Community Center. Dave was a charter member of the NRA & former member of the 700 Club, the Model A Ford Club of America & the Mustang Club of America. He was an amateur radio operator & storm spotter. Dave enjoyed having friends & family over for cook-outs & bonfires, working in his yard, flea markets & NASCAR. His hobbies included resorting vintage cars and more recently, collecting & restoring vintage toy wagons. Survivors include his daughters, Cynthia Ann (Ben) Lagow of Brownsburg and Sandra Kay (Jay) Ogle of New Castle; step-daughter, Kim Wood Schoeff of Fishers; special friend, Patricia Perkins of New Castle; and six grandchildren, Spencer Ogle and Oriana Ogle, both of New Castle, Kasey Schoeff and Lyndsey Schoeff, both of Fishers, and Anneke Lagow and Dexter Lagow, both of Brownsburg. In addition to his parents, he was preceded in death by his wife, Margaret Pyle in 2000. Graveside services will be 1:00 p.m. Monday, February 21, 2022 at Green Hills Memory Gardens with Pastor Brett Rains officiating. Military rites will be conducted by VFW and American Legion. Funeral arrangements have been entrusted to Hinsey-Brown Funeral Service in New Castle. Memorial contributions may be given to the Henry County Salvation Army, P.O. Box 571, New Castle, IN 47362 or Westminster Community Center, P.O. Box 603, New Castle, IN 47362. You may express condolences or share a memory of David at www.hinsey-brown.com.