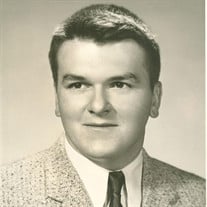 David C. Wood, 79, of New Castle and formerly of Indianapolis, passed away Sunday, March 21, 2021 at IU Ball Memorial Hospital. He was born August 27, 1941 in Indianapolis, a son of the late George D. and Miriam E. (Schanzlin) Wood. A 1959 graduate of Pike High School, David attended Rose-Poly for one year and Purdue extension in Indianapolis for two years. He then completed a Journeyman Apprenticeship. He retired in 1993 from Allison Division of General Motors after 30 years of service where he was a journeyman tool and die maker. He then worked at J.A.S. Graphics in Indianapolis for over 10 years before retiring a second time. He served with the Indiana National Guard from 1964-1970. An avid outdoorsman, David was a longtime member of the Crooked Creek Conservation and Gun Club, where he had also served on the Board of Directors. He was passionate about his garden, enjoyed trapping, skeet shooting, woodworking, and was an avid reader. He leaves to cherish his memory, his wife of nearly 56 years, Patricia Wood of New Castle; a son, Mark David Wood of Indianapolis; a daughter, Lisa (David) Hua of New Castle; three grandchildren, Rosie Hua of Muncie, Samuel Hua of New Castle, and Gabriel Hua of New Castle; a brother, George S. (Janine) Wood of Raleigh, NC, a sister, Vicki Chulock of Florida, and several nieces and nephews. Graveside services will be at 1:00 p.m., Wednesday, March 24, 2021 at Bethel Cemetery, 5252 W. 52nd St., Indianapolis, officiated by Father Whitney Smith of St. James Episcopal Church, New Castle. Memorial contributions in David’s name may be given to the Edison School of the Arts (for library books and uniforms), 777 S. White River Pkwy, West Drive, Indianapolis, IN, 46221. Arrangements have been entrusted to Hinsey-Brown Funeral Service in New Castle. You may share a condolence or memory of David at www.hinsey-brown.com or cards can be mailed to Patricia at 2244 Q Ave, Apt 111, New Castle, IN 47362.