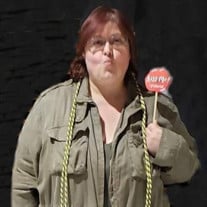 Deborah “Debbie” Renee Marsh, 51, of Knightstown passed away unexpectedly Thursday, October 14, 2021 at her residence. She was born April 6, 1970 in New Castle, Indiana, a daughter of the late Joseph L. Emmons Sr. and Anita (Guerrero) Emmons of New Castle. She was a 1988 Blue River Valley High School graduate and also received an associate degree from Ivy Tech in Business Administration and Medical Coding & Billing. Debbie was a very strong Christian woman; her door was always open and she would help anyone in need. She was very proud of her daughters and grandchildren; they were the light of her life and they always came first. A strong woman, she always took good care of her family and would tackle any problems. In addition to her mother, Debbie is survived by her husband, Roy Marsh of Knightstown; daughters, Mariah (Cody) Curnutt of New Castle and Stormy (Frank) Elliott of Knightstown; grandchildren, Zane, Addy, Orion, Joey, Nolan and Gracelynn; brother, Joe (Brandy) Emmons, Jr. of New Castle; paternal grandmother, Mary Emmons of New Castle; mother and father-in-law, Don & Lorraine Marsh of New Castle; several aunts, uncles and cousins. In addition to her father she was preceded in death by maternal grandparents, Sipriana & Jose Guerrero; several nieces, nephews, aunts & uncles. Services will be 7:00 p.m. Monday, October 18, 2021 at Hinsey-Brown Funeral Service in New Castle with Jerry Ingalls officiating. Visitation will be from 4:00 p.m. until time of services at the funeral home. Memorial contributions may be given to the American Cancer Society, P.O. Box 7009, Indianapolis, IN 46207-7009. You may express condolences or share a memory of Debbie at www.hinsey-brown.com.