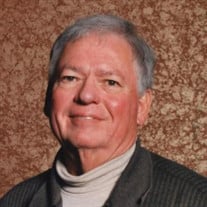 Donald “Don” E. Ward, 72, of New Castle passed away Saturday, July 10, 2021 at his home. He was born November 16, 1948 in New Castle to the late Raymond and Helen (Ford) Ward. He was a veteran of the United States Army and served with the Army Reserves for 11 years. A retiree of Chrysler Corp., Don served as a guard at Westwood Lake and was an EMT for 18 years. He was a member of the First Baptist Church where he served as a Trustee and an Elder. Don enjoyed golfing, collecting coins and guns. He is survived by his wife of 27 years, Linda K. Ward whom he married June 25, 1994; his children: Donald E. Ward II, Timothy P. (Mendy) Ward and Aimee E. (John) Sharp; grandchildren, Todd, Shelby, Morgan, Kamryn, Samantha, Cody, Hope, James, Paige, Kenady and Timothy, Jr.; several great-grandchildren; a brother: Kenneth (Toni) Ward; two sisters: Kathy (Bill) Kendall and Diana (David) Luellen; brother-in-law: Mark Bowling; several aunts, uncles, nieces, nephews and cousins. In addition to his parents, he was preceded in death by two sisters, Gloria Bowling and Phyllis Ward. Services will be held at 11:00 A.M. Wednesday, July 14, 2021at Hinsey-Brown Funeral Service in New Castle with Pastor Ken Durham officiating. Burial will follow in South Mound Cemetery, West Lawn Addition. Visitation will be from 5:00-8:00 P.M. Tuesday, July 13 at the funeral home. Military rites will be conducted by a contingent of the U.S. Army, the American Legion and the VFW. Memorial contributions may be given to ALS Association, P.O. Box 37022, Boone, IA 50037-0027. You may express condolences or share a memory of Don at www.hinsey-brown.com.