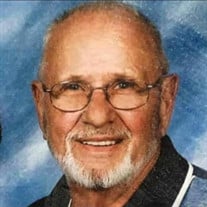 Donald E. Elliott, 92, of Anderson (formerly of Kennard), passed away Monday, May 23, 2022 at Middletown Nursing and Rehabilitation Center. He was born January 4, 1930 in Kennard, to the late Fred and Selma (White) Elliott. A 1949 graduate of Kennard High School, Don served in the U.S. Army. He retired in 1992 from Avesta Steel (formerly Ingersoll Steel). He also farmed for many years in the Kennard area and more recently worked at Ace Hardware in New Castle. He was a member of the Middletown American Legion, where he participated on the Honor Guard, and was also a member of Mt. Summit Christian Church. He leaves to cherish his memory, his wife of over 67 years, Rose M. (Weesner) Elliott of Anderson; a son, Dennis (Sharon) Elliott of Kennard, and a daughter, Donna (Curt) Collins of Anderson; grandchildren, Leah Kendall (Matt Lee) of Fishers, Sean (Caitlyn) Collins of Fishers, and Courtney Collins of Anderson; two great grandchildren, Clara Kendall and Liam Collins; several nieces, nephews, and great nieces and nephews. In addition to his parents, he was preceded in death by two brothers, Paul and Richard Elliott and a sister, Wanda Elliott. Services will be at 6 p.m., Friday, May 27, 2022 at Mt. Summit Christian Church with Ben French and Pastor Ben Brandt officiating. Visitation will be from 2-6 p.m., Friday at the church prior to the service. Burial will be at Green Hills Memory Gardens at a later date. Memorial contribution may be given to Mt. Summit Christian Church, P.O. Box 310, Mt. Summit, Indiana 47361. You may express condolences or share a memory of Donald at www.hinsey-brown.com. ***You may view the service live by Clicking Here.

Donald E. Elliott, 92, of Anderson (formerly of Kennard), passed away Monday, May 23, 2022 at Middletown Nursing and Rehabilitation Center. He was born January 4, 1930 in Kennard, to the late Fred and Selma (White) Elliott. A 1949 graduate... View Obituary & Service Information