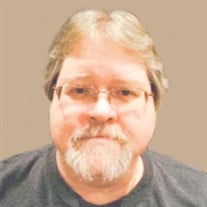 Donald Wayne South, 63, of New Palestine, passed away Saturday, February 20, 2021 at Community Hospital East. He was born January 29, 1958 in New Castle, son of William Clyde and Vonnie Pearle (Hurst) South. Wayne was a 1976 graduate of Knightstown High School. He started working at CVS Distribution Center June 1979 and fulfilled his career there. Wayne loved his family and friends very much and when he told a story about any of them he would get a special twinkle in his eye. He was very proud of all of them. Wayne loved all types of racing with NASCAR being his favorite. He collected all types of NASCAR memorabilia. His favorite driver was Dale Earnhardt Sr. When Dale passed away Wayne took up Dale Earnhardt, Jr. as his driver. When Jr. retired he followed Chase Elliott. He enjoyed the U.S. Nationals and the Indy 500 races. Wayne loved music; country and southern rock were his favorite. He also liked guitars and had several of them. He enjoyed car shows, going on road trips, especially going to Brown County in the fall and going through caves. He visited the Maker’s Mark Distillery and became a Maker’s Mark Ambassador in May 2009. Every year Wayne looked forward to hosting the family’s annual Christmas Party. It was a big event for the family and Wayne put a lot of heart and work into making it a special event. Wayne is survived by his wife of 39 years, Yvonne South; siblings, Kay (Ray) Phelps and Clyde South; mother-in-law, Lourita Abercrombie; brothers-in-law, Larry Abercrombie and David Abercrombie; many nieces and nephews; and his dogs, Harley and Bogart. In addition to his parents, he was preceded in death by sisters, Millie Cox, Christina Neel and Doris Barr; infant sister, Thelma Jean; father-in-law, Raymond Abercrombie; brothers-in-law, Jim Cox, George Neel and Gary Barr; sister-in-law, Pam South. Services will be at 12:00 PM Friday, February 26, 2021 at Hinsey-Brown Funeral Service Knightstown Chapel with Pastor Danny Goddard officiating. Burial will follow in South Mound Cemetery. Visitation will be from 10:00 AM until time of service. Memorial contributions may be made to the American Diabetes Association, PO Box 11454, Alexandria, VA 22312. Due to Covid-19 and the governor’s mandate, face coverings will be required. Condolences and memories of Wayne may be shared at www.hinsey-brown.com.