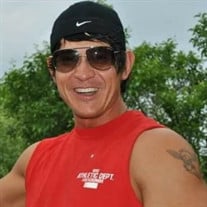 When told something, Chuck often responded with, “Amen!”. The meaning of Amen is “so be it.” Edward Charles “Chuck” Cooley, 49, left this world on Saturday to dance and sing praises to his Most High God. He was born September 27, 1972 in Bad Bruckenau, Germany, a son of Ralph and Samnlang (Khambootnz) Cooley. A 1992 graduate of New Castle Chrysler High School, Chuck also earned a Bachelor’s degree in Business Administration from Indiana University East. He served in the United States Marines and worked at Allegheny Ludlum Steel for several years. He also worked as a personal trainer at the Henry County YMCA. He was presently a truck driver with Springport Trucking Company. Chuck did everything to the extreme. He loved, cared, uplifted, and gave to the extreme. An active member of New Covenant Worship Center in New Castle, he worshipped, studied and quoted scripture, and served God to the extreme. Can we say Amen? Chuck was an over comer. He desired to better himself as a dad, son, friend, and servant of God. He had a unique and contagious personality. He leaves to cherish his memory, his mother, Sam Gindhart, and her husband, Hank Gindhart, who Chuck respected as a father figure. His two sons, Levi Cooley of New Castle, and Denver (Micayla) Cooley of New Castle; grandchildren, Estelle Cooley, Aspen Cooley and Aurora Cooley; a sister, Karen Cooley of Columbus, MS, and two brothers, Bill Cooley of New Castle and Bobby (Pamela) Cooley of Seattle, WA; several nieces, nephews, aunts and uncles; and a spiritual sister, Kristi Davis. He was preceded in death by his father, Ralph Cooley, and his paternal grandparents, Ed and Jessie Bossert. Visitation will be from 4-8 p.m., Friday, January 28, 2022 at Hinsey-Brown Funeral Service in New Castle. Services will be at 11:00 a.m., Saturday, January 29, 2022 at New Covenant Worship Center with Pastor Eric Haler and Alex Fulton officiating. Memorial contributions may be given to the Edward Charles “Chuck” Cooley Memorial Fund, c/o Hinsey-Brown Funeral Service in New Castle. You may share a condolence or memory of Chuck at www.Hinsey-brown.com.