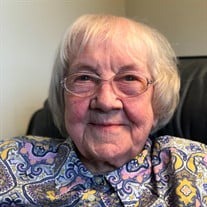 Elizabeth (Betty) Hope Powell Bunner departed peacefully from this Earth after living a deeply fulfilling life for 101 years. She was born on February 17, 1920 on their farm near Amboy Indiana to Merle and Bessie Powell. Her parents gave her the middle name of Hope, after they had endured the painful loss of three boys born in the years between her birth and those of her two older sisters, Jeannette and Glennis. Two more siblings, Martha and Ronald were born, and all five of the Powell children maintained close ties throughout their long lives. Elizabeth was the sole survivor of her family of origin. After graduating at the age of 16 as valedictorian from Amboy High School in 1936, Elizabeth obtained a two year teaching certificate from Ball State Teacher’s College. While at Ball State, she met the love of her life, Ralph Bunner. They “courted” as Elizabeth began her career as a teacher; they married in 1941. Together they built a busy, happy life centered around their farm (near Mt Summit), their children, extended family, community and church. When her youngest daughter entered public school, Elizabeth returned to the classroom, first in Mt Summit, and then in New Castle at Sunnyside Elementary School, where she taught 5th grade for many years. During those years, she also completed a Bachelor’s and Master’s degree from Ball State. Elizabeth and Ralph were involved in many organizations in Henry County, as a couple and individually. They were faithful members of First Friends Meeting in New Castle and among the co-founders of the Keystone Class there; they were also lifelong members of a group in Henry County known as Young Farmers. After Ralph’s sudden death in 1982 and her retirement a few years later, Elizabeth became a teacher leader in Bible Study Fellowship. She enjoyed traveling with friends. She was also a member of and held various leadership roles in the United Society of Friend’s Women. Delta Kappa Gamma, the DAR, Eastern Star, and the Home Ec Club of Mt. Summit. Elizabeth hosted many groups and friends in her farm home, and was known as a wonderful cook, especially of pies. Even in her elder years, she braved the thorns of black raspberry bushes by her woods to make black raspberry jam, much to the delight of attendees of the First Friends Meeting yearly bazaar. In 2012, at the age of 92, Elizabeth decided that she needed to move from her farm home to a simpler life. She resided in an independent living facility in Novi, MI for three years. She was happy to be near daughter, Linda, and husband, Peter and to explore Michigan with them, particularly the Upper Peninsula. Then in 2015 she decided to move again — this time to assisted living at the Hermitage Roanoke, near her daughter Rosemary, and husband, Bill, in Virginia. She spent nearly six happy years there — making new friends, enjoying the activities, staff, and the beautiful surroundings. She felt so lucky and grateful to live long enough to see her grandchildren grow up, find partners, and have children of their own. In every phase of her life and to the end, Elizabeth lived with great purpose, consistent with her Christian beliefs. She is survived by her three children: Mark Bunner, of Frankfort, IN; Rosemary Maxwell (Bill) of Salem, VA; Linda Dobrzeniecki, (Peter), of Wolverine Lake, MI; 5 grandchildren: Jay Bunner-Sorg (Eric); Brian Bunner (Stephanie); Todd Bunner (Christa); Beth Ann Ferguson (Jared); Elizabeth Maxwell (Adrian); 13 great grandchildren; nieces and nephew and their families. Services will be 11:00 a.m. Saturday, June 5, 2021 at First Friends Meeting in New Castle with Stan Banker officiating. Burial will follow in Woodlawn Christian Cemetery in Springport. Visitation will be 4-7 p.m. Friday at Hinsey-Brown Funeral Service in New Castle and one hour prior to services Saturday at the church. In lieu of flowers, the family suggests that remembrances can be made to any of the following, First Friends Meeting, 503 S. Main St., New Castle IN, 47362 or Hermitage Roanoke’s Good Samaritan Fund, Hermitage Roanoke, 1009 Old Country Club Rd, NW, Roanoke VA 24017; or a charity of one’s choice. You may express condolences or share a memory of Betty at www.hinsey-brown.com.

Elizabeth (Betty) Hope Powell Bunner departed peacefully from this Earth after living a deeply fulfilling life for 101 years. She was born on February 17, 1920 on their farm near Amboy Indiana to Merle and Bessie Powell. Her parents gave... View Obituary & Service Information