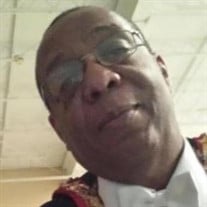 Ernest C. “Skip” Clayborn, 69, of New Castle transitioned from his earthly home on Thursday, July 8, 2021 at Hickory Creek of New Castle. He was born August 16, 1951 in New Castle, Indiana, to the late William Alexander and Emma (Smith) Clayborn, II. He graduated from Walter P. Chrysler High School in 1969. He joined the U.S. Marine Corp, after graduation and was honorably discharged. He worked at Chrysler Corporation until his retirement 2003.Skip worked for Rural Metro Ambulance Service as an EMT/driver at Indianapolis Motor Speedway 500’s and Brickyard 400’s. He worked as a CASA with the Henry County court system. After earning his CASA certification in 2014, advocating for multiple children in appropriate custom/custody issues. He was past master of Peerless Lodge #32 in Anderson (Prince Hall affiliated). He was a member of Marion Consistory #60 and was the Potentate 2019 & 2020, for El Zora Temple #124. One of his biggest accomplishments, he was a softball coach with New Castle Girls Youth Softball League, first at Baker Park and continuing as the league transitioned over to Osborne Park from 1985 – 2016. Skip was coach for the Pirates the entire time. Many girls’ lives were touched by his guidance and wisdom for the game and in life. Left to cherish his memory are his wife, Julie (Hunter) Clayborn; daughter, Jul Clayborn; son, Brandon (Nicole) Clayborn; sisters, Donna, Debra “Pety”, Dianne “DeDe”; brothers, William A. III “Sonny”, and Anthony “Tony” (Susan); grandchildren, Rachelle, Trey, Kobie, Jayci, Luke, Calleigh, Rayleigh, Alyssa Martin and Brody Alexander Clayborn; and great grandson, Jett; and a host of nieces, nephews and cousins; included are sisters in-law, “Uncle” Mary Ellen Hunter, Sally Archie ( Eddie); brothers in-law, Paul Hunter and Tom Hunter. In addition to his parents he was preceded in death by a sister, Connie; daughter, Amy; and son Ernie. Services will be 7:00 p.m. Wednesday, July 14, 2021 at Hinsey-Brown Funeral Service in New Castle with Pastor Anthony Harris officiating. Visitation will be from 4:00 p.m. until time of services Wednesday. Military rites will be conducted by a contingent of the U.S. Marines, the American Legion and the VFW. Memorial contributions may be given to the New Castle Girls Youth Softball League, P.O. Box 110, New Castle, IN 47362 You may express condolences or share a memory of Skip at www.hinsey-brown.com.