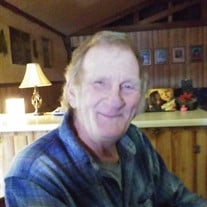 F. Edward Hughett, 72, of Knightstown, passed away Tuesday, February 1, 2022 at Hancock Regional Hospital following an extended illness. He was born January 19, 1950 in Tennessee to the late Robert and June Gertrude (Walker) Hughett. A car guy, Ed enjoyed working on and rebuilding cars. He could rebuild the engines as well as completely restore the body of the car. He also enjoyed fishing, and also enjoyed the company of his many dogs, especially his present pet dog, Snoopy. In recent years, he watched cooking shows and enjoyed cooking. His children and grandchildren were special to him and he enjoyed times spent with them. Known to be a jokester, he was a well-liked man and will be greatly missed. He leaves to cherish his memory, his wife, Linda Hughett of Knightstown; children, Jennifer (Richard) Cox of Fouke, AR, Finis Edward (Roberta) Hughett Jr. of Mt. Vernon, IL, and Teresa Dawn Hughett of Washington, IN; a step daughter, Leslie Mulryan of Knightstown; 16 grandchildren; 27 great grandchildren; two sisters, Brenda Hughett of New Castle and Shirley (Tom) Thompson of New Castle; several nieces and nephews; and two uncles, Bob Walker and Roy Walker, both of Ohio. In addition to his parents, he was preceded in death by two brothers, Charles and Dennis Hughett. Services will be at 1:00 p.m., Tuesday, February 8, 2022 at Hinsey-Brown Funeral Service Knightstown Chapel with Richard Cox officiating. Burial will follow in South Mound Cemetery in New Castle. Visitation will be from 11:00 a.m. until time of service on Tuesday at the funeral home. You may share a condolence or memory of Ed at www.hinsey-brown.com.