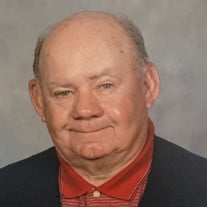 Gary Clinton Cross, 85, of Greensboro passed away Friday, May 14, 2021 at his residence surrounded by his loving family. He was born on December 13, 1935 in Spiceland to the late John Fletcher and Ethel Loretta (Kuhn) Cross. Gary was a 1954 graduate of New Castle Chrysler High School then served in the U.S. Army until 1956. While serving with the Army, he was a personal driver for his Captain and often had dinners at their home. Following his service in the U.S. Army, he joined the National Guard and served for an additional two years. He and three other service men were left and hitchhiked through Paris and Italy to the French Riviera. Later, Gary worked and retired from Deed’s Equipment in Lawrence following 35 years of employment. He owned and raced race cars over the years with #32 always being his number. He also won two National Crown’s back to back in his modified late model car. Left to cherish his memory are his wife of 66 years, Evalena (Sexton) Cross, daughters, Gaylena (Bill Jr.) Hannon, Kim (Ed) Bullerdiek, Penny Yapp; grandchildren, Matt (Kim) Hannon, Mark (Lizza) Hannon, Miranda (Tony) Parrish, Alexis Oldham (Tyler Edwards), Paiton Oldham (Dylan Coleman), Torie Oldham (Alex Humphrey); great grandchildren, Jakob and Sydney Hannon, Taylor Bennett, Mila and Isabella Hannon, Caden, Coley and Clayton Parrish; siblings, Judy (William) Brown, Kathy (Frank) Purnell; brother in law, Bob (Ruby) Sexton and several nieces, nephews and cousins. In addition to his parents, he is preceded in death by his brother on April 30, 2021, Jerry Cross; and mother and father in law, Josh and Pearl Sexton. Services will be at 1:00 p.m. Thursday, May 20, 2021 at Hinsey-Brown Funeral Service in New Castle with Pastor Denny Neal officiating. Burial will follow at South Mound Cemetery-West Lawn Addition. Visitation will be from 4-8:00 p.m. on Wednesday, May 19 at the funeral home. Military honors will be conducted by contingents from the U.S. Army, American Legion and VFW.  In Lieu of flowers, memorial contributions may be made to Suburban Hospice, 801 N. State St. Greenfield, IN 46140. You may express condolences or share a memory of Gary at www.hinsey-brown.com

Gary Clinton Cross, 85, of Greensboro passed away Friday, May 14, 2021 at his residence surrounded by his loving family. He was born on December 13, 1935 in Spiceland to the late John Fletcher and Ethel Loretta (Kuhn) Cross. Gary was a 1954... View Obituary & Service Information