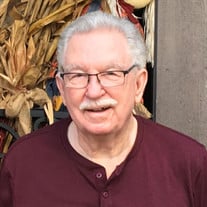 Gary R. Razor, 78 of Indianapolis, IN passed into the arms of Jesus peacefully on January 10th, 2022 after a long battle with Parkinson’s Disease. He was formerly from New Castle IN. Gary met his wife, Donna (Sue) Bumgardner in Fleming County Kentucky and they were married July 10th, 1965 in Morehead Ky. In over 56 years of marriage the two were inseparable. Gary retired from Chrysler Corporation in the mid 80’s and transitioned to successfully run multiple businesses working side with Sue. Gary later went back to the automotive field where he retired from Honda of America in Marysville, OH. Gary was an avid golfer and enjoyed playing and teaching the game to his children and grandchildren. He loved all sports especially the Ohio State Buckeye Football team and the Indianapolis Colts. Gary had two children, a son Brian Razor of Avon IN, and a daughter Tamala (Robert) Wagner of Anderson IN. He has 6 grandchildren and two great grandchildren. Gary is survived by his wife, son, daughter, three grandsons Evan Razor of Nashport, OH, Alec Razor of Richwood, OH and Ethan Razor of Delaware, OH. 3 granddaughters Kasi Butler of New Castle, IN Tori Butler of Anderson, IN, Hali Wagner of West Chester, OH and 2 great granddaughters Madi and Willow Butler of Anderson IN. Gary has one brother William Razor (Louise) of West Chester OH, numerous nieces and nephews and wonderful friends. He was preceded in death by his father Eugene Razor and mother, Oda Razor of New Castle IN. Services will be 1:00 p.m. Thursday, January 13, 2022 at South Memorial Drive Church of God. Burial will follow in Green Hills Memory Gardens. Visitation will be 11:00 a.m. until time of services at the church. Funeral arrangements have been entrusted to Hinsey-Brown Funeral Service in New Castle. Memorial contributions may be given to the Special Olympics of Indiana, 6200 Technology Center Drive, Suite 105, Indianapolis, IN. 46278. You may express condolences or share a memory of Gary at www.hinsey-brown.com.

Gary R. Razor, 78 of Indianapolis, IN passed into the arms of Jesus peacefully on January 10th, 2022 after a long battle with Parkinson&#8217;s Disease. He was formerly from New Castle IN. Gary met his wife, Donna (Sue) Bumgardner in Fleming... View Obituary & Service Information