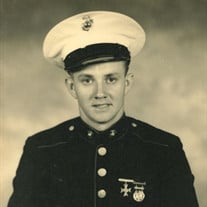 Jack L. Trump, 98, of Knightstown, passed away Monday, February 28, 2022 at Hancock Regional Hospital. He was born July 14, 1923, in Dearborn County, Indiana, to the late Harold and Susan (Pope) Trump. Jack was a 1942 graduate of Knightstown High School and he was the last survivor of the class. He served in the U.S. Marine Corps from December 1942 to December 1945, attaining the rank of Staff Sergeant. He completed aviation mechanic training programs at Navy Pier and 87th & Anthony in Chicago and at Cherry Point, N.C., and then was stationed in the Pacific Theater, where he served as a crew chief on B-25 Mitchell bombers. Both before and after the war, Jack worked with his father and his brother bob in operating multiple service stations in Knightstown. He also worked in sales for a few years and then joined his brother in owning and operating the Texaco service station in Knightstown until his retirement in 1978. Following his retirement, he joined his friend Roscoe Fadely in a chime-making business, Tamarack Enterprises, which he really loved. Jack was married to Bonnie (Cottrell) Trump for nearly 60 years until her death in 2012. They enjoyed traveling and spent 25 winters in California and Florida. Until his death, he lived in the same house in Knightstown that he had lived in since 1960. He loved having breakfast at the local Knightstown restaurant, where he often sat with his nephew Bruce, and was known for long, entertaining stories, which he loved to repeat often. He is survived by his twin daughters: Karla (husband: Bill) Roberts of Knightstown and Marla (husband: Ron) Winters of Rushville; grandchildren: Ross (Alisa) Winters, Jamie (Phillip) Morgan, Adam (Hannah) Winters, all of Rushville, and Jessica (Jason) Neill of Greenfield; nine great-grandchildren; and many nieces and nephews. In addition to his parents and his wife, he was preceded in death by his brother Robert Trump, his sister Beverly McDonald, and a grandson Jonathan Roberts. Visitation will be from 5:00 PM – 7:00 PM Friday, March 4, 2022 at Hinsey-Brown Funeral Service, Knightstown Chapel with funeral service to follow at 7:00 PM with Pastor Bill Roberts officiating. Military rites will be conducted by the Knightstown American Legion Post 152 and an active duty contingent of the U.S. Marine Corps. Private burial will be in Glen Cove Cemetery on Saturday. Memorial contributions may be made the Knightstown Historical Society, PO Box 74, Knightstown, IN 46148. Condolences and memories of Jack may be shared at www.hinsey-brown.com.

Jack L. Trump, 98, of Knightstown, passed away Monday, February 28, 2022 at Hancock Regional Hospital. He was born July 14, 1923, in Dearborn County, Indiana, to the late Harold and Susan (Pope) Trump. Jack was a 1942 graduate of Knightstown... View Obituary & Service Information