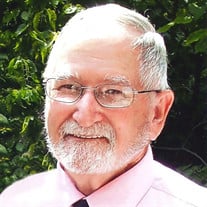 James C. “Jim” Bennett, 80, a resident of Kokomo and formerly of New Castle passed away Friday, March 18, 2022 at St Vincent Hospital in Indianapolis. He was born April 10, 1941 in New Castle to the late Cecil Wood “Curley” and Mildred Irene (Godfrey) Bennett. Jim retired from Chrysler Corp. in 2003 after 37 years of service. He also did construction and cement work part-time. A veteran of the US Army, 82nd Airborne Division, Jim served in Germany during the Vietnam War. He was a member of the American Legion Post 6 in Kokomo and UAW Local 371 in New Castle, where he served as a Trustee, Veteran’s Committee Chairman and Election Committee Chairman. He enjoyed woodworking, gardening and spending time with his family and friends. A highly skilled baker, he was the self-proclaimed “master baker of the family” which always prompted a “Dessert Challenge” to his sister-in-law and anyone else who dared to participate, at every holiday family gathering. In 2007 he made a choice that changed his life, after hearing ministers of the Gospel who preached the message of salvation through faith in Jesus. That choice gave him faith, hope, joy and peace in living the rest of his life preparing for Eternity. He looked forward to and counted it a privilege to gather with others in homes for non-denominational Christian Fellowship Meetings. Survivors include his wife of 25 years: Linda Bennett of Kokomo; children: Michael Wayne (Lisa) Bennett of New Castle, Kathyrn “Kathy” (Brian) Hunt of Middletown, Mechelle (Warren) Crenshaw of Texas; two step-daughters: Melissa DeVries of Noblesville and Kimberly Hay of Kokomo; one step-son: Shane Hay of New Castle; grandchildren: Christopher Bennett, Justin Ferrell, Ashley Hall, Jessica Knepley, Brandi Mullany, Joshua Mullany, Erica Travis, Michael and Joshua DeVries, Connor, Josiah and Kavan Hay; eleven great-grandchildren; siblings: Barbara (Joe) Campbell of New Castle, David (Judy) Bennett of New Castle and Debbie “Deb” Bennett of New Castle; a special father-in-law: Robert Hilligoss of Kokomo, two sister-in-laws and two brother-in-laws of Greentown; several nieces, nephews, cousins, and many workers and friends that were very dear to his heart. In addition to his parents, he was preceded in death by three siblings: Jerry Bennett, Mary Ann Becklund, Douglas Bennett and recently a niece: Carol Becklund. Services will be held at 2:00 PM on Friday, March 25, 2022 at Hinsey-Brown Funeral Home in New Castle beginning with Military Rites conducted by a contingent of the US Army, the American Legion and the VFW. Burial will follow the service in South Mound Cemetery, West Lawn Addition. Visitation will be from 11:00 AM to 2:00 PM Friday, prior to the service. Memorial contributions may be given to the Wounded Warriors Project, PO Box 758517, Topeka, KS 66675. You may view the live-stream of the funeral service, express condolences or share a memory of Jim at www.hinsey-brown.com. ***You may view the service live by Clicking Here.