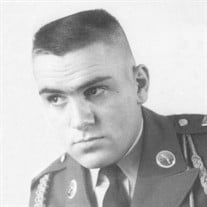 James “Jimmy” Burke, 79, of New Castle, passed away on Thursday, January 13, 2022 at his home. He was born September 15, 1942 in New Castle, Indiana to the late Orville and Mary Helen (Scott) Burke. Burkie, as he was affectionately referred to throughout his lifetime, was a devoted family man and a great provider for his family. He met his true love, Ruth Ann during their early childhood, and eventually married her, with their union lasting 45 years until her passing in 2010. He was a loving father and papaw. He proudly served his country in the U.S. Army and enjoyed being stationed in Germany during his enlisted time. He served as maintenance manager at Stonegate Village during his children’s early years, before gaining employment at Dana Corporation, where he retired from after over 25 years of service. Burkie also owned and operated Race Street Raceway and Hobby for a few years, where he taught several of his grandchildren about racing RC cars. They loved their time spent with their Papaw, and he was happy to have a common bond with them, spending precious time with them, enjoying an activity together that they loved. He leaves to cherish his memory, his companion Stella Brockman of New Castle, children, Bryan (Holly) Burke of Cypress, TX and Kenny (Brandie) Burke of New Castle; eleven grandchildren, Jeff Reynolds, Kendra Burke, Kelly Burke, Tyler Burke, Jason Burke, Drew (Jordan) Burke, Brenton Lake, Broderick Cassetty, Nadia Burke, Natalya Burke, Kinnah Burke, Aaliyah Burke and Nevaeh Burke; eight great grandchildren; a sister, Mary Jane (Eddie) DeHart; three brothers, Charles (Gloria) Burke, Carl Ray (Cathy) Helm, Butch (Gail) Privett, and numerous nieces and nephews. In addition to his parents, he was preceded in death by his wife Ruth Ann, daughters, Jama and Vanessa; son, Jerry; grandson, Jarred, and several of his brothers and sisters. James family would like to express their thanks to AseraCare Hospice for their wonderful and loving care. Visitation will be from 11:00 a.m.-1:00 p.m., Wednesday, January 19, 2022 at Hinsey-Brown Funeral Service in New Castle with services beginning at 1:00 p.m. Pastor Paul Davis will officiate. Burial will follow South Mound Cemetery-West Lawn Addition. Military rites will be conducted by the American Legion and a contingent from the U.S. Army. Memorial contributions may be given to the James Burke Memorial Fund c/o Hinsey-Brown Funeral Service. You may share a condolence of James at www.hinsey-brown.com.