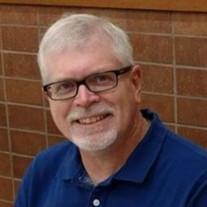 Jeffrey Allen Snyder, 59, of Hagerstown went to be with his Lord and Savior on Sunday, June 13, 2021 at his home with his wife by his side. He was born August 30, 1961 in Richmond to the late Robert A. Snyder Jr. and Barbara S. (Kile) Dennis. A 1979 graduate of Hagerstown High School, Jeff also attended the Building Trades program through New Castle High School. He was a very talented woodworker and could build or fix anything. Jeff has worked at Magna Machine and Tool as a Toolmaker for over 30 years and at one time owned his own carpentry business. He took great pride in building his own home from the ground up where he raised his children. He loved sharing his knowledge of woodworking and would teach anyone who wanted to learn. Jeff especially cherished spending time with his family but mostly his grandchildren. He loved taking them for rides on the golf cart, having sleepovers and going camping. He was a former deacon, trustee and Sunday school teacher at Mooreland First Christian Church, but currently attended New Testament Church of Christ in Hagerstown. He never gave up! Jeff had a strong faith in God and would share the love of God to anyone who would listen; especially in the last several months of his illness, he remained an eternal optimist and always put his trust in God. Survivors include his wife, Stacy (Biehl-Weisheit) Snyder; children, Dusten Allen (Storey) Snyder, Rachae Marie (Matt) Barr, Kaine Alexander Snyder (Lindsay Halstead); step-children, Tiffany Lynn (Zach) Pope, Jessica Dianne Weisheit; grandchildren, Lydia and Andrew Snyder; Emma, Kendall and Gavin Barr; Korbin, Hunter and Brynnley Snyder; siblings, Duane (Penny) Snyder, Cindy Greenwell, Stephanie (Jim) McFatridge; step-siblings, Thomas W. Dennis and April Dennis, and several nieces and nephews. In addition to his parents, he is preceded in death by his stepfather, Thomas L. Dennis. Services will be at 10:00 a.m. Saturday, June 19, 2021 at Hinsey-Brown Funeral Service in New Castle with Pastor Paul Gearhardt officiating with burial following at Mooreland Cemetery. Visitation will be from 4:00 – 7:00 p.m. Friday, June 18 at the funeral home. Memorial contributions may be made to Henry County Hospice, 798 N. 16th Street New Castle, IN 47362, for whose care and support his family is eternally grateful. You may express condolences or share a memory at www.hinsey-brown.com. ***You may view the service live by Clicking Here.

Jeffrey Allen Snyder, 59, of Hagerstown went to be with his Lord and Savior on Sunday, June 13, 2021 at his home with his wife by his side. He was born August 30, 1961 in Richmond to the late Robert A. Snyder Jr. and Barbara S. (Kile) Dennis. A... View Obituary & Service Information