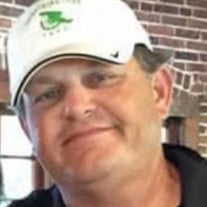 Jim “Beef” Rains, 57, of New Castle passed away unexpectedly at his home on January 24, 2021. He was born June 26, 1963 in New Castle to the late Bill and Ginger (Woodward) Rains. He was a 1981 graduate of New Castle Chrysler High School and attended Ball State University where he studied accounting. He worked at Ball Park Cards in New Castle for many years. Jim was also employed at Keihin in Greenfield for many years. He was a member of the Moose Lodge, Sons of the American Legion and Eagles Lodge in New Castle. Jim was a friend to many, and always “had a buddy” if you needed something done. An avid sports enthusiast, he loved playing golf, and loved baseball, especially the Chicago Cubs and the New Castle Trojans. Jim adored his grandkids and loved his dog. He also enjoyed “picking”, dealing in collectables, relics and memorabilia. He is survived by his wife, Brenda Rains of New Castle; daughter, Kandice Coatie of New Castle; 5 grandchildren, Presley Gibson, Rozlynn Gibson, Marcel Coatie, Leona Coatie and Sawyer Gibson; sister, Cindy (Tim) Wilkinson of New Castle; sister-in-law, Sherry (Bruce) Schmidt of Muncie; brothers-in-law, Michael (Linda) Dewees of Bloomington and Christopher Dewees of New Castle; several nieces and nephews. In addition to his parents, he is preceded in death by his maternal and paternal grandparents. Services will be held at 2:30 p.m. Friday, January 29, 2021 at Hinsey-Brown Funeral Service in New Castle with Pastor Steve Arnett officiating. Visitation will follow from 4:00 – 8:00 p.m. Friday at the funeral home. In lieu of flowers, memorial contributions may be given to the American Diabetes Association, P.O. Box 7023, Merrifield, VA 22116-7023. Due to the Governor's mandate, masks will be required. You may express condolences or share a memory of Jim at www.hinsey-brown.com.