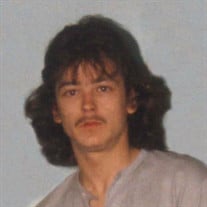 John G. “Bub” Lodge Jr., 52, of New Castle, passed away unexpectedly Friday, December 25, 2020 at his residence from injuries sustained in a house fire. He was born November 9, 1968 in California, a son of the late John Grover Lodge Sr. and Mary Lou (Rising) Lodge. Bub, also known as “Uncle John” to many, liked having fun and making people laugh. He was a welder for many years, and as a mechanic, could fix anything he set his mind to. He was a car and motorcycle enthusiast. Amongst his several nieces and nephews, he enjoyed spending time fishing and riding dirt bikes with the ones who lived locally; Josiah, Jacob, Zoe, Cori and Taylor. He leaves to cherish his memory, a son, Akeem (Amy) Jackson of New Castle; two grandchildren, Sunset and Sage Jackson; siblings, Alicia Hinzo of CA, Esther (Matt) Kleaver of CA, Mitchell (Shelly) Hardage of OR, Joseph (Anita) Lodge of Greenfield, and Monique (Troy) Dilley of New Castle; several aunts, uncles and cousins; several great nieces and nephews. In addition to his parents, John G. and Mary Lou (Rising) Lodge, he was preceded in death by a brother, Rodney Lodge; sister in law, Jackie Lodge; a sister, Suzie Lodge, an infant sister, Clissy Lodge and a brother in law, Jerry Hinzo. Services will be private and at the convenience of the family. Memorial contributions may be given to The Guest House Men’s Shelter, 1407 Walnut St., New Castle, IN 47362. Arrangements have been entrusted to Hinsey-Brown Funeral Service in New Castle. You may share a condolence or memory of Bub at www.hinsey-brown.com. ***You may view the service live at 5:00 p.m. Friday, January 1st by Clicking Here.