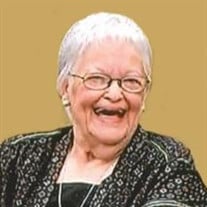 Kay Frances Anderson, 90, of Knightstown, passed away Friday, July 30, 2021 in Greenfield, IN. She was born February 3, 1931 in Havre De Grace, MD, a daughter of the late Russell and Edith (Rice) Arnold. On April Fool’s day 1949, she married the love of her life, Ephriam Anderson. They enjoyed 72 wonderful years together, although the fact they married on April Fool’s day did make for some lively conversation throughout the years. Kay was a longtime member of Raysville Friends Meeting. She was a loving wife and mother who was fiercely protective of her children, grandchildren, great and great-great grandchildren. Her generosity to family and charities was endless. She is survived by her husband, Ephriam Anderson of Knightstown; children, Janet (Kelton) Silver, Frank (Kelly) Anderson, Mark (Lori) Anderson, and Judy (James) Sears, all of Knightstown. She also leaves eleven grandchildren, eleven great grandchildren (with three more on the way), and one great-great grandchild; a sister, Mary Jean Elmore of Frankfort, DE; sister-in-law, Goldie Little of Litchfield, KY; brothers-in-law, Max Mummert of Moss, TN and Bill Anderson of New Castle. Besides her parents, she was preceded in death by sons, James Anderson and Bruce Anderson; granddaughter, Lisa Anderson; great grandson, Kaiden Anderson; sisters, Oneida Day and Dorothy Scott. Per Kay’s request, there will be no services. In lieu of flowers, the family requests donations be made in Kay’s memory to the charity of the donor’s choice. Arrangements have been entrusted to Hinsey-Brown Funeral Service, Knightstown Chapel. You may share a condolence or memory of Kay at www.hinsey-brown.com.