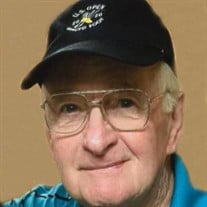 Kedric Marcell Wallace, 83, of Spiceland, Indiana, passed away at his residence on Saturday, November 13, 2021. He was born on August 24, 1938, in Greensboro, Indiana, the son of the late Samuel J. Wallace and the late Vera A. (Nipp) Wallace. Kedric had an exceptional work ethic, managing a number of projects throughout his thirty-year career at Chrysler. He started in the inspection department in 1966, rising to the role of Chief Inspector of the New Castle plant before his retirement in 1996. Prior to working at Chrysler, he served his country in the National Guard from 1956 – 1958, as well as working at Modernfold and Warner Gear. Kedric spent his live exploring a great many interests—some by design, and some by necessity. Whether it was his hobbies, at work, or with family, his good-natured competitiveness shined through, and so did his evergreen spirit of generosity. He was an excellent tennis player, and volunteered his time as a coach for Knightstown and Tri High School. He enjoyed a number of self-taught hobbies, all of which he excelled at-whether painting, construction, gardening, golfing, fishing, or music, a love of which he passed onto his children and grandchildren. Family was the center of his life, and he enjoyed bringing them together at every opportunity. Famous for his clam chowder, fried bluegill, and cheesecake, he put his gifts as a cook to use at every gathering, and was always quick to feed someone. In essence, Kedric was playful, generous, tireless, and-as he’d certainly be the first to admit-ornery. In addition to his parents, he is preceded in death by his first wife, Doris Ann (Lee) Wallace; his sister, Phyllis (Wallace) Woodward; four brothers, Ray, Sam, Phil and Donald; his sisters-in-law, Betty (Lee) Stonerock & Colleen (Lee) Turpin; and his brothers-in-law, Carl Stonerock, Max Woodward & Arnold Turpin. He is survived by his loving wife of sixteen years, Anita, and their dog, Torzar; a daughter, Jennifer McCord of Fayetteville, North Carolina; two sons, Michael (Suzanne) Wallace of Noblesville and Mark (Melissa) Wallace of New Castle; a stepson, Eddie (Aly) Stephens of Fountaintown; fourteen grandchildren; four great grandchildren; a brother-in-law, Hugh (Carol) Lee of Middletown; and sister-in-law, Nelle Wallace of Greensboro & Annis Wallace of New Castle; and numerous nieces & nephews. A celebration of life will take place on Saturday, November 27, 2021 from 6:00 – 9:00 p.m. at The Lodge on Main, 818 Main Street, Lapel, IN 46051. Funeral arrangements have been entrusted to Hinsey-Brown Funeral Service in New Castle. Memorial contributions may be given to National MS Society, 214 Overlook Circle, Suite 153, Brentwood, TN 37027, American Heart Association, P.O. Box 840692, Dallas, TX, 75284-0692 or Blue River Conservancy District, 1894 South County Road 275 West, New Castle, IN 47362. You may express condolences or share a memory of Kedric at www.hinsey-brown.com.

Kedric Marcell Wallace, 83, of Spiceland, Indiana, passed away at his residence on Saturday, November 13, 2021. He was born on August 24, 1938, in Greensboro, Indiana, the son of the late Samuel J. Wallace and the late Vera A. (Nipp) Wallace. Kedric... View Obituary & Service Information