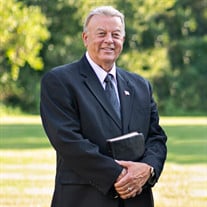 Pastor Larrel G. Boling, 75, of Middletown, went home to be with the Lord on August 12, 2021 at I.U. Ball Memorial Hospital following a brief illness. He was born December 23, 1945 in New Castle, a son of the late Lona C. and Clara Letta (Taylor) Boling. A 1964 graduate of Walter P. Chrysler High School, he was proud to go years without ever missing a day of school as a Trojan. He retired from General Motors in 1999, with over 35 years of service. He then enjoyed working on sign surveys for a few years as well as “flipping” a few houses. His drive to work hard was well- known to his family and was constant. Pastor Larrel loved the word of God. He spent much time reading the Bible, organizing sermons and scripture subjects. His love for God and His word correlated with his love for people, which made him a great leader and pastor. He pastored Mountain View Baptist Church in Modoc, Berean Baptist Church in Yorktown, and for the past almost 20 years- Charity Baptist Church in New Castle. Larrel built many things with his hands. He was a handyman and was known as the “papaw can fix-it” man. With a pencil in hand he could draw a “goofy” or any other character lickety split. He used his hands to play the guitar and sing in church, at the kitchen table, or on the porch swing. Of all the things he built, his greatest delight was the family that he and Wanda grew together in their 56 years of marriage. He would drop anything to help any one of them out. He always had an innate ability to make everyone he met feel special and loved. He really enjoyed making people laugh. He had a servant’s heart for His Lord and Savior Jesus Christ and the biggest love for his church family. He was a pastor that always showed up for those in need to sit, to pray and tell anyone he met about his Jesus so they could experience a changed life. When he wasn’t serving others, Larrel enjoyed fishing, golfing, hunting, working outdoors, watching Westerns and much to his family’s chagrin, riding his motorcycle. In recent years, he enjoyed pawn shopping for old worn out guns to fix them up and make them brand new. He liked to play games, where his competitive nature showed. He didn’t like to lose, which along with much prayer, was the grit that took him through a serious liver transplant nearly 3 years ago. He was always a fighter and fought hard until the very end. Surviving is his wife, Wanda Boling, daughter Marti (husband: Craig) Armstrong, son Eric (wife: Gina) Boling, daughter Michelle (husband: Erik) Frei, daughter Laura (husband: Casey) Kemerly; grandchildren Dakoda (wife: Karlee) Armstrong, Erikka (fiance: JT Griggs) Boling, Dalton Armstrong, Seth (wife: Lily) Boling, Kaden Frei, Colton Kemerly, Clara and Audrey Frei; great-grandchildren Asher and Blair Armstrong. He was looking forward to the birth of his 9th grandchild, Elsie Kemerly, due to arrive in December. Surviving siblings include Gerald (wife: Sandy), Eddie (wife: Karen), Roger (wife: Suella), David, Steven, Donna and Peggy Boling, Vickie Chalfant, and Sheila (husband: Ken) Key, Bonnie (husband: Alvin) Sanders, many beloved nieces, nephews and cousins. He was preceded in death by his parents, Lona and Clara Boling; siblings, Erma and Max Hart, Cecil, Deloris, Junior, Richard, Johnny, and Shirley Boling, Bob and Linda Dishroon; nephews, Steven Hart and Kelly Adkins; niece, Molly Arthur. Visitation will be from 4-8 p.m., Friday, August 20, 2021 at Hinsey-Brown Funeral Service in New Castle. Funeral services will be at 1:00 p.m., Saturday, August 21, 2021 at Charity Baptist Church in New Castle with Bro. Rick Cross and Bro. Eric Boling officiating. You may view the service live by Clicking Here. Burial will follow in Green Hills Memory Gardens. Memorial contributions may be given to the Charity Baptist Church, 1518 W. Railroad St., or the American Liver Foundation, P.O. Box 299, West Orange, NJ, 07052. You may share a condolence or memory of Larrel at www.hinsey-brown.com. Per CDC guidelines, facial coverings are recommended in a closed building, for the vaccinated or unvaccinated. Please follow this recommendation.

Pastor Larrel G. Boling, 75, of Middletown, went home to be with the Lord on August 12, 2021 at I.U. Ball Memorial Hospital following a brief illness. He was born December 23, 1945 in New Castle, a son of the late Lona C. and Clara Letta (Taylor)... View Obituary & Service Information