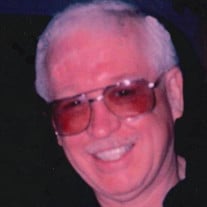 Larry N. Gooding, 81, of New Castle, passed away Monday, December 20, 2021 at Henry Community Health following a brief illness. He was born October 22, 1940 in New Castle, a son of the late Proctor and Mary Virginia (New) Gooding. A 1959 graduate of Walter P. Chrysler High School, Larry served in the U.S. Navy during the Vietnam Conflict, where he served on the 7th Fleet aboard the U.S.S. Robert H. Mc Card as an electrician. He retired from Chrysler Corporation in New Castle in 1996 following 34 years of service. Larry had a deep love and respect for the Lord Jesus and he helped everyone that he met in need. Larry enjoyed attending gun shows, helping people, and loved to travel. He was a member of the American Legion and was a past member of the Masonic Lodge. He is survived by two sisters, Betty Gipe of Mt. Summit and Linda Weaver of New Castle; a step-son, Edward Cohen of TN; life-long friends, Charlie Eddings and David Carty, both of New Castle; three nieces, Angela (Tom) Rao of Prosper, TX, Shelly (Bill) Stewart of Clermont, FL, and Gayle Frost Soliday of Mt. Summit; a nephew, Dale Frost of Mt. Summit; three great nephews, Luke Soliday of Indianapolis, Tristan Soliday of Knightstown, and Zachary Stewart of Clermont, FL; several cousins. In addition to his parents, he was preceded in death by two sisters, Patricia Gooding and Katherine Sue Silver; two brothers, Ronald “Pete” Gooding and James Gooding; three brothers-in-law, Jerold Silver, James Weaver, and Dennis Gipe. Visitation will be from 3-5 p.m., Monday, January 17, 2022 at Hinsey-Brown Funeral Service in New Castle with a Memorial service beginning at 5 p.m., officiating by Pastor Tobby Smith. Military rites will be conducted by the American Legion, Veterans of Foreign Wars and a contingent from the U.S. Navy. Burial will be in Sugar Grove Cemetery at a later date. Memorial contributions may be given to Cerebral Palsy of Henry County, 307 Roland Lane, New Castle, IN 47362, or Wounded Warrior Project at www.woundedwarriorproject.org in memory of Larry. You may share a condolence or memory of Larry at www.hinsey-brown.com. ***You may view the service live by Clicking Here.