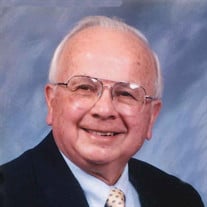 Leland “Max” Hart, 88, of New Castle, passed away Saturday, May 12, 2018 at Westminster Village in Muncie. He was born February 3, 1930 in Cadiz, IN, a son of the late Carl Luther and Cleo (Andrews) Hart. He graduated from Cadiz High School in 1948. He also worked on the family farm with his brother, Wayne, father, and grandfather while in high school. He was a delivery man for Meadow Gold Dairy in the 1950’s, and was Chief of Plant Protection at Chrysler Corporation in New Castle for 30 years. He met the love of his life and married Erma Jo Boling on August 2, 1953. Max went into the U.S. Army on September 17, 1954 and was stationed at Lachapelle, France as a clerk. One couple became very special to the Hart family, Dewey and Marcella Barr, while stationed in France. Max continued to stay in contact with them. He returned from France on August 28, 1956 with Erma and started his family. Max was a loving and kind neighbor, always helping anyone that needed something done. Mowing their yard, moving furniture, whatever someone would need, he would be there. Max was a member of the First Baptist Church Family Life Center in New Castle. He is survived by his children, Kim (Chuck) Casada of Muncie, Kevin (Kathy) Hart of Greenwood, and Scott (Angie) Hart of Beavercreek, OH; seven grandchildren, Kathryn and Stefanie Casada, Lisa (Travis) Hawkins, Courtney (Jerry) Muir, Rebecca Hart, Joshua (Kenzie) Hart, Emily (Corey) Chea; great grandchildren, Layla, Max and Ella Muir, and Alice Hawkins; nieces and nephews, Carol Kemerly, Alan Hart, Mark Sanders, and LeaAnn Sanders. In addition to his parents, he was preceded in death by his wife, Erma; a son, Steve, a sister, Sarah Ann Sanders, and a brother, Wayne Hart. Services will be at 12:00 p.m., noon on Wednesday, May 16, 2018 at Hinsey-Brown Funeral Service in New Castle with Max’s son, Kevin officiating. Military Rites will be conducted by the American Legion and VFW. Visitation will be from 10:00 a.m. until time of services at noon on Wednesday at the funeral home. Burial will follow in South Mound Cemetery. Memorial contributions may be given to the Alzheimer’s Disease Research, 50 E. 91st St., Suite 100, Indianapolis, IN 46209. You may share a condolence or memory of Max at www.hinsey-brown.com.