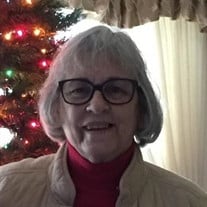 Linda “Jill” Burris, 86, of New Castle, passed away peacefully Friday evening, December 10, 2021 at Stonebrooke Rehabilitation Center in New Castle. She was born January 9, 1935 in New Castle, a daughter of the late Vernon and Echo (Harris) Wainscott. She was a 1953 graduate of New Castle High School and was a very active member of the First Presbyterian Church in New Castle. Jill was a florist for many years and at one time owned her own flower shop. She was a volunteer at the New Castle-Henry County Public Library, Henry County Art Society and volunteered at the Wright Patterson Air Force Museum. Jill was known for baking cookies and enjoyed spending time watching her grandchildren play sports. She enjoyed making bears, quilts, drawings and painting. Survivors include her son, Joseph G. Burris III of New Castle; daughter, Diane (Brock) Coffman of Lewisville; grandchildren, Brice (Aubrey Lindsey) Coffman of Spiceland and Bailey (Cayden) Starkey, of Knightstown; great granddaughter, Collins Coffman; three nephews, Michael Wilt, Larry Wilt and Steve Burris. In addition to her parents she was preceded in death by her husband, Joseph G. Burris, Jr; a sister, Joanie Brumfiel and a nephew, Jeffrey Scott Burris. Services will be Tuesday December 21, 2021 at 1:00 pm at Hinsey-Brown Funeral Service in New Castle. Burial will follow in South Mound Cemetery. Visitation will be from 11:00 am until the time of service. Memorial contributions may be given to the Alzheimer’s Association, 50 East 91st Street, Suite 100, Indianapolis, IN 46240. You may express condolences or share a memory of Jill at www.hinsey-brown.com.