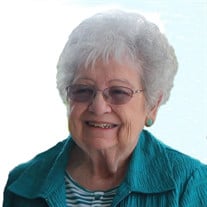 Martha C. Bailey, 91, passed away on Thursday, December 10, 2020, at Ascension St. Vincent Hospital, Indianapolis. She was born Martha Catherine Garvey on June 24, 1929, in New Castle, Indiana. She was the fourth child of Thomas Francis Garvey and Leone (Brown) Garvey. Martha attended Wier Elementary School and graduated from New Castle High School class of 1947. On November 15, 1980, in St. Anne Catholic Church she married Jack L. Bailey who preceded her in death on July 24, 2015. Martha worked in the business office of Henry County Memorial Hospital for over 20 years. She was later employed by Maher Buick-Pontiac and then for other dealerships that succeeded it. She retired in 1994. She enjoyed traveling and made several trips to Mexico and Europe with her oldest and dearest friend, the late Mary Kelly. After retirement she became interested in genealogy and spent many, many successful hours researching her Irish ancestry with the help of family friend, Doug Magers. Martha and Jack enjoyed taking cruises, attending horse races, and traveling around the country to Jack’s U.S. Navy reunions for many years. Martha is survived by two step-daughters, Kimberly (Gregg) Fowler of Ft. Collins Colorado and Marisa Anderson of Greenfield; a step-grandson, Radnor Fowler of Ft. Collins, Colorado; several nieces and nephews. In addition to her parents and husband, Martha was preceded in death by her four siblings, James Francis Garvey, Margaret Jean (Garvey) Smith, Rosemary (Garvey) Brown and John Michael Garvey and a step-grandson, Michael Huckaby. A public viewing and visitation with the family will be held on Wednesday, December 16, 2020 from 11:00 a.m. until noon at St. Anne Catholic Church in New Castle. A private family Mass of Christian burial and the Rite of Committal services will follow. In lieu of flowers, donations may be made to St. Anne Catholic Cemetery, c/o St. Anne Catholic Church, 102 N. 19th Street, New Castle, IN 47362. Due to the COVID virus, those attending are asked to wear a face mask and to practice social distancing. Arrangements have been entrusted to Hinsey-Brown Funeral Service in New Castle. You may express condolences or share a memory of Martha at www.hinsey-brown.com. ***You may view the service live at 12:00 p.m. on Wednesday by Clicking Here.