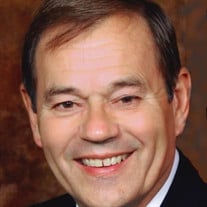 Merrill A. “Pete” Reece of New Castle lost his earthly battle with Alzheimer’s on January 29, 2022 and went to be with the Lord at the age of 73. Born September 19, 1948 in Muncie, IN he is the son of Ivan and Mary (Ford) Reece. Pete was preceded in death by his father, Ivan and younger brother, Dale. Left to cherish his memory is his wife of 52 years, Vicki (Phipps) Reece; his oldest son, Mark and his children, Riley and Max, their mother, Peggy Reece; his daughter, Cindy (Jason) and their children, Delaney and Darcy Duncan; his youngest son, Chad (Jennifer) and their children, Carson and Scarlett Reece; his mother, Mary F. Hardy and his older brother, David (Lori) Reece; several nieces and nephews. He graduated from Winchester High School in 1966 and attended Ball State where he met his wife. Pete served in the National Guard from December 1968-December 1974. He did his apprenticeship at Warner Gear where he learned the trade of toolmaking. He retired in 2010 from Navistar. Pete owned and operated Reece Insulation from 1960-2010 where he always found work for those who needed it. He attended and was very active at the First Church of the Nazarene and received the “Distinguished Service Award”. He was an usher, greeter, made morning coffee and whatever needed done but found his niche in the Sound Room; He operated the sound equipment for over 17 years. He truly loved every minute of it. Pete’s other loves were Indiana Basketball, Colts Football, his green Dodge truck and his pride and joy, 1970 Duster. Services will be at 1:00pm Tuesday February 1, 2022 at Hinsey-Brown Funeral Service in New Castle with Rev. Danny Goddard officiating with burial to follow at South Mound Cemetery, West Lawn Addition. Visitation will be from 11:00am until the time of service on Tuesday. Memorial contributions may be given to the Alzheimer’s Association. You may express condolence or share memories of Pete at www.hinsey-brown.com.