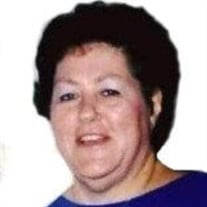 Nina Faye “Mam” Dishman, 78, of New Castle went home with her Lord and Savior on Friday April 22, 2022 at her sister’s residence while surrounded by family and carrying her daughter Lisa, who passed away just two days prior. She was born on March 14, 1944 in Albany, KY a daughter of the late William Clinton and Freda Mae (Thurston) Vitatoe. Nina Faye was a very loving and caring woman who was like a grandmother to all; always asking “do you need anything?” to anyone that would come around, that’s how she became known as Mam. She loved her friends but especially loved her family and spending time whenever possible, especially family gatherings and cookouts; Mam was famous for her potato salad. Mam was Elvis’s number one fan and enjoyed her trips to Graceland; she enjoyed traveling in general. She also enjoyed gardening, camping and collecting lighthouses and angels. Loving to goof around and make people laugh, Mam enjoyed the trips out with her sisters and best friend, Shirley Raines; they were known as the “Golden Girls”. She was a strong woman who didn’t have an easy life and was a cancer survivor of 18 years. Her faith was in her Lord and Savior; she was a longtime member of the Southside Church of the Nazarene in New Castle. Nina is survived by her children, Carolyn (George) Adkins of New Castle and Nancy (Ted Jr.) Cook of Dunreith; grandchildren, Clint (Pebbles) Caudill of New Castle, Samantha (Jake) Wines of New Castle, Lina Davis of New Castle, Thomas Adkins of Richmond and Jacob Adkins of Spiceland; great grandchildren, James Dishman, Anakin Wines, Zach Johnson, Roman and Alexis Adkins; siblings, Ina Roberts of New Castle, Larry (Mary) Vitatoe of New Castle and Helen Johnson of New Castle; uncle, Eugene Vitatoe of Bluffton; sister-in-law, Jean Dishman of New Castle; special friend, Shirley Raines of New Castle; several nieces, nephews and cousins. In addition to her parents, Nina was preceded in death by her husband, James Arnold Dishman; daughter, Lisa Caudill; son, Michael “Mike” “Dish” Dishman; granddaughter, Victoria Caudill; brother, Billy Vitatoe. Services will be at 2:00pm Saturday April 30, 2022 at Hinsey-Brown Funeral Service in New Castle with Pastor Jim Anderson officiating. Burial will follow in South Mound Cemetery. Visitation will be Friday from 4:00pm-8:00pm at the funeral home. Memorial contributions may be given to the American Cancer Society. You may express condolences or share memories of Mam at www.hinsey-brown.com.

Nina Faye &#8220;Mam&#8221; Dishman, 78, of New Castle went home with her Lord and Savior on Friday April 22, 2022 at her sister&#8217;s residence while surrounded by family and carrying her daughter Lisa, who passed away just two days prior.... View Obituary & Service Information