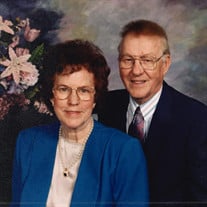 Omrie Harmon, 100, of New Castle passed away Sunday, February 6, 2022 at Hickory Creek of New Castle. He was born March 20, 1921 in Albany, KY to the late Elmer and Cloda (Tarter) Harmon. He lived in New Castle his entire life and met the love of his life, Geraldine (New) Harmon on roller skates, and they married on Valentine’s Day in 1942. Omrie was a World War II veteran and as a Draftsman Mechanical Engineer he was instrumental in the invasion of Normandy on D-Day, by mapping out the route for the invasion. He was awarded 2 Bronze Star Medals, Meritorius Unit Award Medal and a good conduct ribbon. He was stationed in Germany, England and Northern France. Always self-employed; he owned and operated Yellow Cab in New Castle for 15 years and also owned Harmon Motor Sales for many years. He enjoyed buying and selling cars until the age of 100. Omrie was a long time member of Foursquare Church. A gifted artist, he loved to make signs and as a romantic, Omrie made homemade cards for Geraldine when stationed overseas. He enjoyed car auctions and going to auto parts yards to look for bargains. Omrie was always looking for ways to help his family. He was a man of God with strong faith who prayed with many over the years. His family, children and grandchildren all looked up to him, seeking and cherishing his advice. He is survived by his children, Kenneth (Sharon) Harmon and Linda Harmon; grandchildren, Ken Harmon, April (Colin) Forrest, David Harmon, Dana Arterburn and Erica Jones; great-grandchildren, Levi Cooley, Denver (Micayla) Cooley, Tristen Forrest, Mersadeez Hendricks, Kameron Forrest and Saphyra Hendricks; great-great-grandchildren, Estelle Cooley, Aspen Cooley, Aurora Cooley and one on the way; several nieces and nephews. In addition to his parents, he was preceded in death by his wife of 80 years, Geraldine L. Harmon, only three days before his passing; brothers, Arlen Harmon, Clyde Harmon, Gene Harmon and Cecil Harmon; and a sister, Irene Crone. The family would like to extend their appreciation to Dr. Steven Miller for his friendship, prayers and medical care given to Omrie over the past few years. Services for Omrie and Geraldine will be at 5:00 p.m. Sunday, February 13, 2022 at Foursquare Gospel Church, 3200 S. 14th St. New Castle, IN 47362 with visitation from 3:00 – 5:00 p.m. Pastor Jim Becker will officiate. Military honors will be conducted contingents from the New Castle American Legion/VFW and U.S. Army. Together, they will be laid to rest on their 80th anniversary, Valentine’s Day, in private ceremony at South Mound Cemetery-West Lawn Addition. Memorial contributions may be made to the Foursquare Gospel Church, 3200 S. 14th St., New Castle, IN 47362. You may express condolences or share a memory of Omrie at www.hinsey-brown.com.

Omrie Harmon, 100, of New Castle passed away Sunday, February 6, 2022 at Hickory Creek of New Castle. He was born March 20, 1921 in Albany, KY to the late Elmer and Cloda (Tarter) Harmon. He lived in New Castle his entire life and met the... View Obituary & Service Information