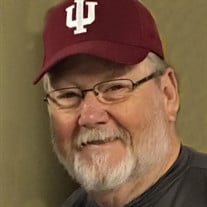 Phillip E “Huck” Huckeby, 67, of New Castle went to be with his Lord and Savior, Thursday, February 25, 2021 at IU Ball Memorial Hospital after a battling a long illness. He was born November 25, 1953 to the late Virginia Lee (Smith) Wagner in Orange County, California. Huck was a 1972 graduate of Walter P. Chrysler Memorial High School where he played football. After graduation, he married Linda Lee Young on June 30, 1972. Huck found work with General Motors, and retired after 37 years from Allison Transmission at the end of 2017. He also owned and operated the New Castle Dairy Queen with his wife. He was a member of Grand Avenue Baptist Church. As those who knew and loved Huck could tell you, he never met a stranger. He always took the opportunity to thank any Armed Forces veteran he saw, and enjoyed hanging out at Ballpark Cards or Sports Corner to catch up with his buddies. Huck was a fan of NASCAR, specifically the Earnhardt family, and an avid New Castle and IU Basketball fan. He also enjoyed volunteering at the Indiana Basketball Hall of Fame. Left to cherish his memory are his daughter Amy (Ryan) Nunn of New Castle, step-dad Walt Wagner of New Castle, sister Brenda (Dale) York of New Castle, brother Gary Huckeby of Macclenny, Florida, sister in law Joyce Conyers of New Castle, several nieces, nephews, cousins, friends and his dog Maggie May. In addition to his mother, Huck was preceded in death by his wife, Linda, in-laws Rev. Clarence and Gaynell Young, brother in law Paul Conyers and sister in law Nancy Huckeby. The family would like to thank the CIC unit and the Hospice team of Ball Hospital, the staff of Bethel Pointe, Eaton EMS, and New Castle-Henry County Emergency Services. Visitation will be on Tuesday, March 2, 2021 from 11:00 a.m. – 1:00 p.m.at Hinsey Brown Funeral Service in New Castle. Services will follow at 1:00 p.m. with Pastors Charles Dugger and Tony Piper officiating. Burial will follow at South Mound Cemetery-West Lawn Addition. In lieu of flowers, memorial contributions may be made to the Henry County Humane Society, 11 Midway Drive, New Castle, IN 47362. Due to COVID-19 and the governor’s mandate face coverings are required. You may express condolences or share a memory of “Huck” at www.hinsey-brown.com.