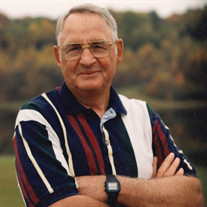 Ray Eugene Cable, 86, of Batesville passed away October 15, 2021 at St. Vincent Hospital in Indianapolis. Ray was born August 26, 1935 to Marion and Opal (Banta) Cable. He was raised in Spiceland and graduated from high school in 1954. He was class president his Junior and Senior years. He was also President of FFA during his Junior and Senior years, and was involved with class plays and student council. As a young boy he worked on their 10 acres with his father and later helped many neighbors who farmed. Ray had many talents. He installed TV antennas, served in the Navy from 1956 to 1963, and worked for IBM for 32 years. He also did woodworking. After his retirement, he and his wife, Betty, moved to Oldenburg, IN. He helped farmers in his community. He loved to go fishing and had a lake of his own. Ray is survived by his children, Dennis (Valori) Cable of Golden Valley, AZ, Karen Purviance of Tallahassee, FL, Kathy (Greg) Ginder of Carmel; grandchildren, Jason (Abby) Cable of Auburn, IN, Kaitlin Ginder of Indianapolis, Kevin (Molly) Hutcheson of Tallahassee, FL and Joshua (Angel) Cable of Brooklyn, NY; great grandchildren, Cooper and Adelynn; sister, Joy Humbert of New Castle; sister-in-law, Anita Cable of New Castle; Also several nieces and nephews. In addition to his parents, Ray was preceded in death by his wife, Betty L. Cable; brother, William “Bill” Cable and an infant son, Kevin Cable. Services will be held at 11:00am Wednesday October 20, 2021 at Hinsey-Brown Funeral Service in New Castle. Burial will follow in South Mound Cemetery West Lawn Addition. Visitation will be from 10:00am until the time of service on Wednesday. In Lieu of flowers the family has requested donations be made to the Salvation Army, 2500 Washington St. New Castle, IN 47362. Envelopes will also be provided at the funeral home. You may share memories or express condolences of Ray at www.hinsey-brown.com.

Ray Eugene Cable, 86, of Batesville passed away October 15, 2021 at St. Vincent Hospital in Indianapolis. Ray was born August 26, 1935 to Marion and Opal (Banta) Cable. He was raised in Spiceland and graduated from high school in 1954. He... View Obituary & Service Information