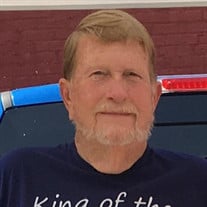 Ronald “Opie” Howard passed away in New Castle, Indiana, on March 22, 2022, at the age of 74. His nickname comes from Opie Taylor played by “the other Ron Howard” on The Andy Griffith Show. Ron joked that he and the Hollywood Ron were basically the same—except our “Opie” was a little older, had a lot more hair, and a lot less money. Ron was a proud member of the last graduating class of Mays High School in 1966, attended the annual reunions, and remained friends with many classmates throughout his life. He went on to attend Lincoln Technical Institute before joining the Armed Forces in September of ’67. Ron served nine years, or as he said, “nine years, one month, 11 days,” in the United States Army Signal Corps. He worked as a crypto technician (the machines that encoded and decoded classified communications), serving tours of duty during the Vietnam War (1969) and in the Panama Canal Zone (1973-76). The story behind that job? Always the clever guy, he tested at the top of his class, earning him the ability to select his specialty. He went with the assignment that required the longest amount of schooling just to keep him stateside. Following the service, he worked as an HVAC technician with Arrow Gas Company for 25 years and as a maintenance technician with the United States Postal Service for 20 years before happily retiring in 2013. His retirement gave him plenty of time to enjoy his hobbies of fishing, listening to music, watching Indiana University Basketball, and using his green thumb. Always an avid learner, Ron loved trying new things. Earning a real estate license, becoming an EMT, restoring a limited-edition Harley-Davidson golf cart, and serving as the architect of his family’s new home were just some of the ways he showed off his skills. But his favorite was spending time with “the girls”—the 300,000 honeybees he supported as a beekeeper. His passion for beekeeping fed his love of the outdoors and his entrepreneurial spirit. You could find him talking about why Opie’s Bees honey was the best at the Rushville Farmers Market on summer Saturdays. When asked what he was proudest of, he said his marriage to Christine, his wife of 48-and-a-half years. Also surviving are his four children: Ronda Lassiter, Krista Abel, Lauren Howard, and Ty Howard. He will be missed as the ornery brother of his oldest and youngest sisters Joan Hale and Kathi Tompkins-Glover. He was a proud grandfather to four grandchildren, eight great grandchildren, and two granddogs. Ron is preceded in death by his parents Walter “Skeet” Howard and Opal (Campbell) Tompkins, as well as siblings Dixie Jones-Murray, Thomas Jackson, Darwin “Buddy” Howard, Harrison Howard, and Alice Mae (Howard) Monroe. Visit with the family from 10 a.m. – noon on Friday, April 1 and share stories of remembrance at the celebration of life following from noon – 1 p.m. at Hinsey-Brown Funeral Service - Knightstown Chapel. The family requests in-person guests wear masks. As a proud Army veteran and beekeeper, friends and family can make donations in Ron’s honor to The Gary Sinise Foundation or Hives for Heroes. As Ron always liked to say, “Glad you got to see me.” You may send a condolence or share a memory of Ron at www.hinsey-brown.com. ***You may view the service live by Clicking Here.