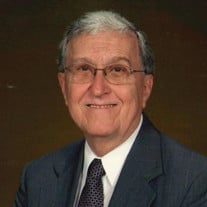 ***PLEASE NOTICE LOCATION CHANGE DUE TO POSSIBLE INCLEMENT WEATHER. Services will now be held at 2:00 p.m. Friday, May 28 at Hinsey-Brown Funeral Service in New Castle. Russell E. Dicken, 85, of New Castle, was reunited with his wife, Jan on Monday, May 24, 2021. He was born January 2, 1936 in New Castle, to the late James T. and Mary Adaline (Morris) Dicken. Russell graduated from New Castle High School in 1953, where he was sixth in his class. He then served in the U.S. Army from 1954-1957, specializing in signal school and radar repair. An accomplished draftsman, he worked many years at Modernfold in New Castle and retired from Delaware Machine in Muncie in 1999. He was a past member of Trinity United Methodist Church in New Castle and presently attended New Lisbon Christian Church. A trivia buff, Russell won several “jingle” contests over the years, writing catchy marketing phrases and limericks. He enjoyed playing bluegrass music on guitar, was a well-known jokester, and enjoyed playing all games with his grandchildren. An avid sports enthusiast, Russell and Jan enjoyed attending local games and watching college and Pro sports, as well as watching tennis matches. He leaves to cherish his memory, a daughter, Jill (David) Hermenet of New Castle; a son, Brian (Amanda) Brown of Anderson; two grandchildren, Jordan Hermenet of New Castle and Victoria Brown of Anderson; a sister, Rosie (John) Brenneke of Waynesboro, VA; a brother, Stephen (Chris) Dicken of New Castle; brother in law, Les Pierce and sister-in-law, Rose Dicken, both of New Castle; several nieces & nephews. In addition to his parents, he was preceded in death by his wife, Jan (Cates) Brown Dicken in 2011; a sister, Louise Pierce, two brothers, Richard “Dick” and “Jim” Raymond Dicken. Services will be at 2:00 p.m., Friday, May 28, 2021 at HINSEY-BROWN FUNERAL SERVICE in New Castle with Pastor Jonathan Willmore officiating. Burial will follow at Mooreland Cemetery. Memorial contributions may be given to Henry County Humane Society, 11 Midway Dr., New Castle, IN 47362. You may share a condolence or memory of Russell at www.hinsey-brown.com.