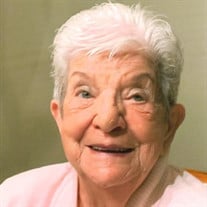 Ruth Ann Casey, 89, a lifelong resident of Shirley, passed away Monday November 29, 2021 at Henry County Community Health. She was born on March 4, 1932 in Shirley to the late Ernest and Edgel (Kendell) Davisson. Ruth was a 1950 graduate of Wilkinson High School. She had also attended the Apex School of Cosmetology in Anderson, IN. She was a neat and tidy homemaker who made home a wonderful place to be, especially during Christmas. Ruth was believed to be loved by all even though she had an ornery sense of humor and always knew exactly what she wanted. Ruth did like to make people smile and lived a good full life all while being a hard worker. She loved to travel with her husband, Donald, whom she married in February 17, 1951. They traveled both internationally and domestically, learning much along the way. Ruth’s claim to fame, her pies; she was famous for her ability to make pies and loved doing so. She also enjoyed sweet corn and tomatoes out of her garden. Ruth is survived by her children, Jeffrey (Becky) Casey of Mesa, AZ, Ginger Casey Jones of Dunreith, Ben Casey of Shirley; grandchildren, Matthew (Kristin) Hardgrove of Denver, Megan Terry Casey of Saugerties, NY, Katherine Grace (Anthony) Nelson of Fort Wainwright, AK, Kailey (Donovan) Lucero of Denver, Emily Rector of Daleville; great grandchildren, Starling Adams, Alex Bailey, Audri Casey, Nora Nelson, Isaiah Nelson, Selena Valenzuela, Jaxon Lucero, Memphis and Raleigh Rector; brother, John Wesley (Loretta) Davisson of Liberty, IN; several beloved nieces, nephews and cousins. In addition to her parents, Ruth is preceded in death by her husband, Donald Lee Casey; granddaughter, Whitney Jones and eight siblings. Services will be at 7:30pm Saturday December 4, 2021 at Hinsey-Brown Funeral Service in Knightstown. Visitation will be from 5:00pm until the time of service on Saturday. Burial will take place at Harlan Cemetery at the convenience of the family. You may express condolences or share a memory of Ruth at www.hinsey-brown.com.

Ruth Ann Casey, 89, a lifelong resident of Shirley, passed away Monday November 29, 2021 at Henry County Community Health. She was born on March 4, 1932 in Shirley to the late Ernest and Edgel (Kendell) Davisson. Ruth was a 1950 graduate of... View Obituary & Service Information