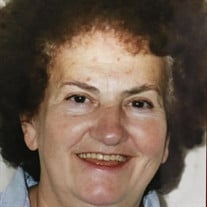 Ruth Hamblin, 83, formerly of New Castle, passed away Friday, April 2, 2021 at Boonespring Care Center in Kentucky. She was born October 5, 1937 in Pennington Gap, VA to George and Rose Freeman. There is a line in a movie that says, “Beginnings are scary, Endings are sad, but it’s the Middle that counts.” (Hope Floats) Today we are sad to say goodbye to her, but are thankful that the thirteen year battle with Alzheimer’s has come to an end. It isn’t the end that matters, but how she faced the middle. She came from the hills of Virginia as the youngest of sixteen children. She met her love, Ed Hamblin and started her family, but lost him to cancer when she was only 32 years old. She never remarried, and when asked why, replied, “No one could ever compare to your dad”. When Ed died, Ruth had four children ranging in age from 14 to 5. She had an 8th grade education, had never worked outside the home and had never learned how to pay household bills. She faced that mountain of grief in losing Ed, but also the challenge of being scared and unsure of how to face life on her own and raise her kids. She faced it with one goal in mind, raising her kids the best way she knew how. She never had a lot of extra left over once bills were paid, but managed somehow to buy her house on the corner of Main St. and Riley Road. She stayed in that location until her battle with Alzheimer’s began. Her house on that corner was a source of welcoming and stability for her children, grandchildren, sisters/brothers and nieces/nephews. She was a mainstay on that corner across from Riley school, and could often be seen out walking in her yard with her little dog. She could always be counted on for a cup of coffee, a gathering spot for a family dinner, or a listening ear when cares of the world got too overwhelming. Her pieces of advice when she just didn’t know what else to say were, “This too shall pass.”, or “Just say, Lord help me”. She loved in her own way and wasn’t often expressive about her feelings, but she could always be counted on if someone needed something. Each of us that loved her, could share a memory that exemplified her goal of doing the best she could to provide a good foundation for her family. She is able to rest easy now and hopefully knows, she left her job well done. Ruth Hamblin, We will love you forever, Like you for always, As long as we’re living, Loved and Cherished you’ll be. (Love You Forever by Robert Munsch) Ruth leaves a long legacy: Her children, Debbie White, Mike Hamblin (Jamie Forrest), Teresa (Tim) York and Jeannie (Dale) Hamblin-Fox. Her grandchildren, Misty (Greg) Zobel, Josh (Jessica) Beaudry, Aaron Beaudry (Monica Pierce), Ethan (Carrie) Beaudry, Trisha (Mike) Millard, Micah Aguilar, Nikki (Kevin) Melton, Tiffany (Scott) Lee, Brittany York, Ashley (Ross) Sandefer, Katie (Brian) Johnson, Lacey York (Travis Noel), Tyler (Olivia) York, Sam, Quinten and Travis Fox. Her Great Grandchildren, Gracen Lain, McKenna, Jackson, Gracie, Triston, Zech, Gunner, and Ryder Beaudry, Thomas and Riley Millard, Jacob and Zackery Aguilar, Tristen, Alex, Shawn, Cole, and Blake Melton, Wyatt Lee, Clay Thompson, Maya and Evie Sandefer, Camdyn Jaggers, Colt and Corbin Johnson, Noah, Rylin and Tatum Noel, Ella, August and Jack York. In addition to her parents, she was preceded in death by her husband, Ed Hamblin in 1970; daughter, Debbie White, and 15 siblings. Services will be at 4:00 p.m., Thursday, April 8, 2021 at Hinsey-Brown Funeral Service in New Castle with Dale Fox officiating. Visitation will be from 2-4 p.m. Thursday prior to the service. You may share a condolence or memoroy of Ruth at www.hinsey-brown.com. In lieu of flowers, memorial contributions may be given to the Ruth Hamblin Memorial Scholarship Fund, donate at this site https://impact.ivytech.edu/RuthHamblinFund .

Ruth Hamblin, 83, formerly of New Castle, passed away Friday, April 2, 2021 at Boonespring Care Center in Kentucky. She was born October 5, 1937 in Pennington Gap, VA to George and Rose Freeman. There is a line in a movie that says, &#8220;Beginnings... View Obituary & Service Information