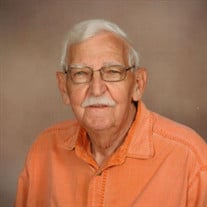 Terrence “Terry” Duane Maze, 85 of New Castle passed away Wednesday, May 3, 2022 at Henry Community Health. He was born November 11, 1936 in New Castle, Indiana to the late Clarence Roman and Grace (Cruickshank) Maze. Terry was a 1954 graduate of New Castle High School. He was a veteran of the United States Army, serving from 1959 – 1962. He was awarded several medals of honor in Washington D.C. Terry was asked to be in the inauguration of President Kennedy and President Eisenhower; he was very proud to serve his country. He worked at Becker Brother’s IGA and retired from Marsh Supermarket, serving as produce manager at both supermarkets. Terry and his late wife Lois, owned and operated the Maze Mini Mart in New Castle for a period of 5 years. Terry loved to fish & was a past member of Rose City Bass Masters Fishing Club, since 1964. He was an active member of St. Anne’s Catholic Church since 1956. Terry enjoyed traveling through many states, plus Canada. Survivors include a son, James Duane Maze of New Castle; daughter, Teresa Maze Slaven of New Castle; three grandchildren of Albuquerque, New Mexico; three great grandchildren of Albuquerque, New Mexico; brother, Mike (Mikie) Maze of New Castle; sister-in-law, Barbara Maze; several nieces & nephews; and special friends, Leah & Julie Fallon, Diamond & Cash Stephens, Walter Witte, and Everet & Dorothy Brown. In addition to his parents, Terry was preceded in death by his wife Lois Marie Maze in 1988; and a brother Jack Maze. Services will be 11:00 a.m. Wednesday, May 11, 2022 at Hinsey-Brown Funeral Service in New Castle with Father John Hall officiating. Burial will follow in South Mound Cemetery. Visitation will be 3:00-7:00 p.m. Tuesday at the funeral home. You may express condolences or share a memory of Terry at www.hinsey-brown.com.