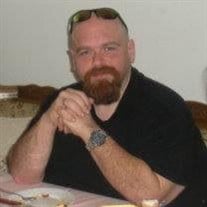 Vincent “Vinny” John Nirich, Jr. 50, of New Castle passed away Tuesday, April 27, 2021 at I.U. Methodist in Indianapolis. He was born April 21, 1971 in Winchester, Indiana, a son of Vincent “Winnie” John Nirich, Sr. and Julia (Stockberger) Nirich. Vinny was a 1989 Graduate of Hagerstown High School and resided in the Hagerstown area a vast majority of his life. He was currently employed at Autocar in Hagerstown for the past 13 years. Despite any physical challenges Vinny had, he was a hardworking, dedicated employee. Vinny was probably best known for his infectious smile that could light up a room. He combined a good heart with a great sense of humor. As a result, he was a wonderful best friend to many and never had a bad word to say about anyone. Vinny was a good cook, loved music and playing the guitar and was a great poker player. He was a member of the Hagerstown Masonic Lodge #49, Hagerstown Sons of the American Legion Post #333 and UAW #3050. Survivors include his mother, Julia Stockberger Nirich of Hagerstown; brother, Gary (Cheryl) Nirich of Sheridan and their son, Zachary Nirich of Portland, Oregon; sister, Angie Nirich Taylor of South Bend; aunts, Wilma Stockberger of Hagerstown, Jane Meek of Hagerstown and Annalyn (Jack) Roemer of Iowa; Croatian relatives; uncle, Ivo; aunts, Cecilija & Marija; and also numerous cousins. In addition to his father, he was preceded in death by his maternal grandparents, Fred & Gladys (Runyan) Stockberger; paternal grandparents, Ilija & Frances Nirich; maternal uncle, Elbert Stockberger; Croatian relative aunt, Annie. Services will be 3:00 p.m. Saturday, May 1, 2021 at Hinsey-Brown Funeral Service in New Castle with Bill Stockberger officiating. Burial will follow in Bales Cemetery. Visitation will be from 1:00 p.m. until time of services at the funeral home. You may express condolences or share a memory of Vinny at www.hinsey-brown.com.