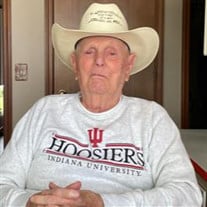 William D. “Bill” Cronk, 90, of Sulphur Springs, passed away Friday, February 25, 2022 at his daughter’s residence following an extended illness. He was born September 20, 1931 in New Castle, a son of the late Chester Clinton and Mary (Burcham) Cronk. He was a 1949 graduate of Cadiz High School, where he excelled in track. He owned the Sinclair station in Sulphur Springs, and then began farming and cattle trading. He owned the Middletown Sale Barn for several years and clerked for the Knightstown Sale Barn for over 30 years. He truly had a passion for livestock trading and sale barns and would visit several different ones in a weeks’ time. He also had managed both the Taloma and Sohigro Fertilizer plants. A longtime member of the Knightstown American Legion Post # 152, he was a veteran of the U. S. Army, serving during the Korean Conflict and attaining rank of Sergeant. A member of the Sulphur Springs Masonic Lodge, Bill served on the board of directors of the Union State Bank and was a double recipient of the Sagamore of the Wabash. He served five terms as a Henry County Commissioner, and was instrumental in the beginning of Three Rivers Solid Waste District. He will be remembered for his love of people and service to his community. He leaves to cherish his memory, his three children, Greg Cronk of Sulphur Springs, Scott Cronk (Kris Hayden) of Sulphur Springs, and Jenny Cronk of Sulphur Springs; grandchildren, Meghan Winter of Verona, WI, Katie Cronk of Bloomington, Mollee (Jarrett) Hamrick of North Vernon, Emilee Boling of Indianapolis, Tiffanee (Dustin) Miller of Chandler, AZ, Clint Cronk (USAF) of Guam; eleven great grandchildren, Ben, Emily, Alex (USAF), Jakob, Trent, Madysen, Maryah, Maycie, Mylee, Max, and Martina; two great-great grandsons, Harvey and Ryder; several nieces and nephews. In addition to his parents, he was preceded in death by his first wife, Marian (New) Cronk; second wife, Donna Smith Cronk; siblings, Thelma Hinshaw, Joe Cronk, Jean Foster, Horace Cronk, Philip Cronk, and Judy Taylor. Graveside services will be at 12:30 p.m., Wednesday, March 2, 2022 at Mt. Summit Cemetery with Brett Rains officiating. Visitation will be from 11:30 until time of service. Military rites will be conducted by the Knightstown American Legion and a contingent from the U.S. Army. Arrangements have been entrusted to Hinsey-Brown Funeral Service in New Castle. In lieu of flowers, please give memorial contributions to Knightstown American Legion Honor Guard, 224 E. Main St., Knightstown, IN 46148. Condolences and memories of Bill may be shared at www.hinsey-brown.com.