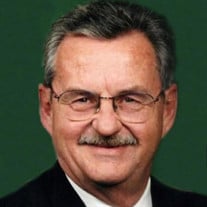 William Jeffrey Van Arsdol (Jeff), 77, of New Castle, IN, died on June 4, 2021, after a prolonged battle with dementia. He married Mary Beth Van Arsdol on October 9, 1965 after graduating from Mt. summit a high School and then Purdue with a B.S. in agricultural and mathematics. They spent most of their lives together in New Castle. Jeff, my dad, was the consummate teacher - at home, in church, and definitely in the classroom. He received his Masters of Education from Butler University and his Administration License from Ball State University. He never used his admin license, but he taught for years, first at Hamilton Southeastern, then Tri High and finally Union. He was also a substitute at New Castle and Blue River through the years. Ive heard that Dad was a tough and thorough FFA and 4H leader and judge, never giving up his passion for farming. Dad was often a lay leader at Trinity United Methodist Church during my childhood and later an Elder at First Christian Church. He had a few other jobs throughout the years, but it was his former students stopping to say hello that proved teaching was where he made the biggest impact. Dad was an avid Boilermaker and Colts fan, but his favorite athletic team was whatever I or my girls were playing on at the time. He never missed a Trojan volleyball game! He also enjoyed teaching his granddaughters, Eliza and Gabby, about farm life - raising and showing goats, cows, horses and rabbits. He was always up for a quick drive in the atv or tractor, fishing in the pond, or loving on an animal (yes Dad, the cows are still pets). Mom and dad were married for 54 years before she passed in 2019. In addition, Dad lost his grandson, William Grant Boe Madden in 2011. His parents, Bill and Harriett Van Arsdol, and his sister Vikkie Johnson have also preceded him in death. While we are mourning the loss of a wonderful father, father-in-law, papa, friend and teacher, I firmly believe that the family reunion happening in heaven is amazing! I want to personally thank the staff and residents at Hickory Creek. You have been a part of our family since 2016. We will be forever grateful for the love and care you gave to us Amy, Jayson, Eliza and Gabriella Madden. Memorial service will be 7:00 p.m. Sunday, June 13, 2021 at Hinsey-Brown Funeral in New Castle with Linda McKiernan-Allen officiating. Visitation will be 5:00 p.m. until time of services on Sunday. Memorial contributions may be given to the First Christian Church, 2000 Bundy Avenue, New Castle, IN 47362. You may express condolences or share a memory of William at www.hinsey-brown.com.

William Jeffrey Van Arsdol (Jeff), 77, of New Castle, IN, died on June 4, 2021, after a prolonged battle with dementia. He married Mary Beth Van Arsdol on October 9, 1965 after graduating from Mt. summit a high School and then Purdue with a... View Obituary & Service Information