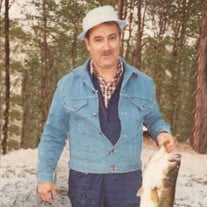 William “Bill” A. Willett, 90, of Knightstown, passed away Monday, August 9, 2021 at his residence. He was born August 31, 1930 in Brockton, MA, a son of Joseph T. and Gertude (Ash) Willett. Bill retired from Detroit Diesel Allisons where he worked as a metallurgist for 38 years. He was a veteran of the U.S. Air force where he served as an instructor during the Korean War and was later a technical sergeant. Bill was a member of Knightstown American Legion and an avid fisherman. He also enjoyed hunting, camping and attending car shows in Pigeon Forge. He loved spending time with his family, especially his grandchildren. He is survived by three daughters, Mary (Ron) Burke of New Castle, Nina (Bill) VanDuyn of Knightstown and Betty (Scott) Perry of New Castle; grandchildren, Brandon and Travis Burke, Amber (Ryan) Leggett, Brian (Kristi) Kelly, Lindsey VanDuyn; 11 great grandchildren; brother, Joe (Ruth) Willett of New Hampshire, sister-in-law, Bonnie Chew of Knightstown, 3 nieces and his beloved dog, Dusty. In addition to his parents, he was preceded in death by his wife, Patricia L. Willett; and brother, Leonard Willett. Services will be at 2:00 PM Friday, August 13, 2021 at Hinsey-Brown Funeral Service Knightstown Chapel with Pastor Anthony Darling officiating. Military rites will be conducted by a contingent of the U.S. Air Force and Knightstown American Legion Post #152. Burial will follow in Glen Cove Cemetery. Visitation will be 12 – 2 PM prior to the service. Memorial contributions may be made to American Cancer Society, 5635 W. 96th St. Suite 100, Indianapolis, IN 46278. Condolences and memories of Bill may be shared at www.hinsey-brown.com.