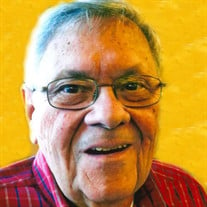 Larry B. Langford, 79, a life-long resident of New Castle, died peacefully at home on November 20, 2021, following a lengthy illness. Larry was born on January 2, 1942, the only son of the late Harold and Margaret (Orr) Langford. His direct descendants have consistently lived in Henry County since 1833. Larry was married for 59 years to his high school sweetheart, Barbara (Young) Langford, who survives him. Larry was a 1960 graduate of New Castle High School, and he later earned his Bachelor’s and Master’s degrees from Ball State University. Larry began his career as a high school math teacher at Knightstown High School where he taught for four years, before returning to teach high school geometry, trigonometry and calculus at New Castle for 31 years. Larry cherished hearing from his former students and was always honored when many of those former students told him that they too had become high school math teachers because of his influence. His hobbies included camping, visiting Civil War battlefields and Frank Lloyd Wright homes, music, movies, nostalgic cars and attending his grandchildrens’ many sports, music and school activities. Larry’s family and friends will greatly miss his kindness, his unrelenting honesty, and his razor sharp dry sense of humor. In addition to his wife Barbara, Larry is survived by his three children, Michael (Linda) Langford of Avon; Lara (Nathan) Conway of New Castle, and Emily (Josh) Jenkins of New Castle; eight grandchildren, Grace, Drew, and Katherine Langford, Autumn (Mitchell) Elliott and Clayton Conway, and Bryce, Jacob and Ava Jenkins; cousins, Tony (Carol) Butcher, Nancy (Langford) Olsen and Rick Langford; his sisters-in-law and brothers-in law, JoAnn Hickman, Janice and Phil Cashdollar, and Angie and Jason Higgins; and several nieces and nephews. In addition to his parents, Larry was preceded in death by his aunt, Marilyn Butcher, a cousin, Charles Butcher, his father-in-law and mother-in-law, Borden and Glenda Young, and a brother-in-law, David Hickman. He also maintained close, life-long friendships with Ed (Joyce) Townsend, Leon (Charlene) Paul, and Lloyd (Linda) Catey. Funeral services will be held at 11:00 a.m. on Saturday, November 27 at Hinsey-Brown Funeral Service in New Castle. Visitation will be on Friday, November 26 from 4:00 p.m. until 7:00 p.m. at Hinsey-Brown Funeral Service. The family requests all guests attending wear a face covering. You may express condolences or share a memory of Larry by Clicking Here. ***You may view the service live by Clicking Here. In lieu of flowers, contributions in memory of Larry may be made to the Riley Children’s Hospital Foundation at 30 South Meridian Street, Suite 200, Indianapolis, IN 46240. Just as importantly and also in memory of Larry, we encourage you to send a note to your favorite teachers to let them know what a difference they have made in your life.

Larry B. Langford, 79, a life-long resident of New Castle, died peacefully at home on November 20, 2021, following a lengthy illness. Larry was born on January 2, 1942, the only son of the late Harold and Margaret (Orr) Langford. His direct... View Obituary & Service Information